The Hong Kong government’s official line is that nothing is happening, there has been no change, rule of law and freedom of expression are fine, so calm down – One Country Two Systems is completely intact. They cannot admit that Beijing’s officials are now directing the local administration in what everyone previously thought were internal affairs.

This denial of the obvious will continue to sap the administration’s less-than-amazing credibility. Another ‘next step’ we might predict in Mainlandization would be for Hong 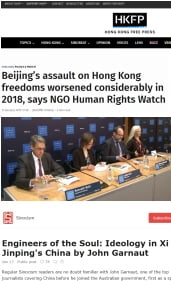 Kong to be dragged into Beijing’s deteriorating relations with other countries. We already see a glimpse of this with our officials having to talk up ‘Belt and Road’ even as more BRI infrastructure debt-trap scams come to light.

Say, for example, China intensifies its perversely belligerent response to the arrest of Huawei’s Ms Meng, and it gets to the stage where patriots and shoe-shiners are expected to publicly shun Canada. How could the local administration avoid joining in – maybe by boycotting diplomatic receptions, or even hassling Canadians at immigration? (Update on Huawei here.)

China’s extreme reaction to the Ms Meng case is taking Panda-tantrums to a new level. Canada enforced the law according to due process in line with international convention, and Beijing takes a couple of hostages – one a diplomat – and suddenly slaps the death penalty on a previously sentenced drug smuggler.

With a clown in the White House, China has had a unique opportunity to assume the role of senior sensible, mature, constructive partner in the international community. Instead, it is bolstering its reputation as a predatory rogue-nation that makes Trump look like a firm believer in the post-1950 world economic and security order.

China’s emergence as an enemy of international norms has been losing it friends overseas. Skepticism that a few years ago was the preserve of fringe Cold-Warrior hawks is now standard among academics, politicians and media. Journalist and Australian government advisor John Garnaut says that in the past he briefed officials on a soft, relatable nation-state: “Taking the ‘Communist Party’ out of ‘China’ was a way of de-activating the autoimmune response.” Now the mask is coming off.

These are the deep roots of what Human Rights Watch are seeing in Hong Kong. I declare the weekend open with compulsory reading: Garnaut’s speech ‘Engineers of the Soul’ on Xi Jinping’s ideological lineage…

We hear a lot about how Xi and his peers blame Gorbachev for the collapse of the Soviet state but actually their grievances go much further back. They blame Kruschev. They blame Kruschev for breaking with Stalin. And they vow that they will never do to Mao what Kruschev did to Stalin.

The Western conspiracy to infiltrate, subvert and overthrow the People’s Party is not contingent on what any particular Western country thinks or does. It is an equation, a mathematical identity: the CCP exists and therefore it is under attack. No amount of accommodation and reassurance can ever be enough – it can only ever be a tactic, a ruse.

Without the conspiracy of Western liberalism the CCP loses its reason for existence.

4 Responses to It’s all Kruschev’s fault