Can Carrie outdo CY for dislikable-ness?

It would take super-human effort and determination to be a less popular Hong Kong Chief Executive than CY Leung. CY came across as vindictive, creepy, menacing-going-on-Satanic, and most of all, so avidly pro-Communist Party even pro-Communists found it embarrassing. Yet, the way Carrie Lam is behaving, we will soon start to look back at him as warm and cuddly – much as we have come to do with hapless first post-handover leader Tung Chee-hwa. 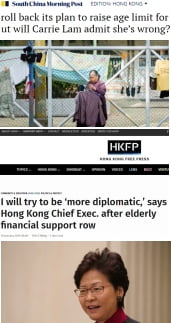 Of her recent screw-ups, the biggest is raising the age limit for elderly welfare payments. This SCMP analysis sums it up – overpaid technocrats condemn a group of already-poor to greater hardship by shaving a miniscule sum from the budget to make a contrived demographics point.

The public mostly opposes the measure. This is obviously a shock to Carrie – maybe she is amazed that the masses disagree with her, but more likely it is their impertinence in expressing an opinion at all. She pretty much snaps back that it’s old policy, passed by lawmakers, and therefore final, so shut up. Pro-democrat legislators gleefully take the opportunity to stick the knife in, and their usually obedient pro-government colleagues feel compelled to join them.

Common sense tells us that, after much glowering and muted tantrums, the administration will reluctantly and gracelessly decide to act like a grown-up and scrap the plan. (Though common sense isn’t worth listening to much these days.)

In the meantime, Carrie makes what is for her a big concession and says she will try to be more diplomatic in future. To translate: ‘Being totally correct, I have nothing to apologize for, but I will remember to make my life easier in future by not rubbing your noses in my superiority so hastily’.

Not knowing how to buy toilet paper means never having to say sorry.

3 Responses to Can Carrie outdo CY for dislikable-ness?