Half the MTR system seizes up this morning. But Transport Secretary Frank Chan has a chauffeur-driven car – so everything’s fine. So long as you can get to Wuhan in three hours at Mach 0.8.

Meanwhile, up in the Motherland… The abduction/arrest of Interpol president Meng Hongwei has damaged China’s image (in stark contrast to all the non-stop cool and hip fun that has been enhancing the nation’s reputation recently). Was this simply the grabbing of another crooked official that was clunkily handled and leaves Beijing looking clueless or disdainful about what foreigners think? Or was it a swift pre-emptive strike against a genuine and acute political threat to the regime?

The South China Morning Post’s Wang Xiangwei sees it mainly as an example of bad PR – just a routine elite-bribery arrest that would be no biggie if it weren’t for the arrogant and heavy-handed approach of the anti-corruption system. 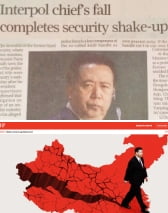 Another SCMP piece argues that it is a bigger deal, concluding Xi Jinping’s methodical purging of the security apparatus of Zhou Yongkang’s people. It does look like part of an extensive pattern. But if it’s so methodical, why the sudden recall and disappearance of the guy, embarrassing China before the world? (Perhaps just that ‘bad PR’ problem. Beijing has contrived a relatively clever ‘ethical high ground’ spin about how the unseemliness of the arrest is proof that no-one is above the law.)

The other theory is that this is a major incident, countering an attempted ‘soft coup’ against Xi by Jiang Zemin’s faction and other malcontents. The aim would be to restrain the Chairman of Everything for Life, rather than overthrow him. These forces oppose Xi’s concentration of power because it harms the nation’s well-being, also known as their families’ accumulation of wealth.

The fact that no-one can tell which (if any) of these explanations is accurate underlines the absurdity and scariness of what is supposed to be the world’s number-two country. I declare the mid-week mini-weekend open with a big read on how Xi is overseeing a Great Leap Backward. It is a picture of greater uniformity and rigidity, the closing off of China from the world, and of significantly greater risks of mistakes – a picture in which Hong Kong’s gradual decline is just a speck.