In case you missed them, the public holiday brought us two little reminders of Hong Kong’s place in Beijing’s scheme of things.

Five days ago, our top officials were pleading ignorance of the opening date of the Hong Kong-Zhuhai Mega-Bridge. In classic condescending-Hong Kong-bureaucrat-lording-over-peasants fashion, Transport Secretary Frank Chan brushed away suggestions that the white-elephant project would open towards the end of the month. He – and the rest of us – has now been notified that the big day will be October 23.

We still don’t know whether this means traffic will start flowing on that day, or Chairman-of-Everything-for-Life Xi Jinping will simply cut a ribbon at a non-opening opening ceremony. So Frank could, in his own little inadvertent way, be correct, strictly speaking. The point is that our government knows no more about what is going on than anyone else.

The vast link, with three lanes in each direction, will be the World’s Biggest and Longest Slab of Concrete Over Sea in the History of the Universe. It will also almost certainly be embarrassingly under-used. Of the three cities it connects, only Zhuhai and its hinterland has capacity for extra traffic; Macau’s road network is totally full, as is downtown Hong Kong’s. Apart from buses going back and forth, and presumably some trucks carrying containers full of Hello Kitty phone cases, it is hard to see who will use it, especially given the ‘fast and convenient’ permit system for car owners.

The South China Morning Post laboriously describes the thing as part of the Greater Bay Area Hub-Zone Branding Concept. But it is actually the other way round – ‘Bay Area’ is an extension of the bridge project, which came first as a symbol if not means of integrating/absorbing Hong Kong into the Mainland.

The second reminder of Hong Kong’s place in the Communist Party’s world comes from the peculiar goings-on at a gathering of Hong Kong’s pro-establishment tycoon-owned media bosses in Beijing.

They were supposedly summoned to celebrate the 40th anniversary of China’s opening. But they also received a lecture from a CCP propaganda chief demanding (if we read between the lines) that they censor or tailor their coverage to help keep Hong Kong from becoming a base for hostile forces that threaten the nation.

The media folk were told these comments were off the record. But their social-climbing name-dropping instincts naturally got the better of them, so it became a news story back in Hong Kong. The exact chain of events probably varied from one outlet to another, but in general it seems the panicky belated pre-emptive shoe-shining then kicked in, and the story was pulled. Realizing this made them look even more stupid, some ran a discreet version (not for the print edition, obviously).

Most observers assume that the CCP propaganda department is referring to the pro-independence/FCC issue. But its officials are probably thinking of how the local press could improve their understanding of ‘Xi Jinping News Thought’ with regard to all sorts of subjects, such as Xinjiang prison camps, speculation about factional squabbling among CCP elites, or analysis of China’s economic problems. Anything, really. Beijing is telling the Hong Kong establishment media to start getting used to closer guidance. Mainlandization means ‘you do what we say’. 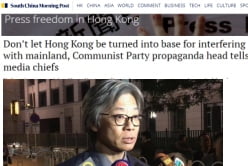