I’m not sure how many people turned out Friday to protest the barring of Lau Siu-lai from the election ballot, but it was a fraction of the number who marched yesterday against the Lantau mega-reclamation white elephant. And while the former gathering was a ritual for the same old (and young) faces, the latter was a relatively spontaneous display by what looked like some mainstream pissed-off middle-class families.

The government is proposing to spend half a trillion dollars on something – land – that we already have (for example, the unmentionable barely used firing range zone around Castle Peak is far bigger than the proposed reclamation). The official rationale is that assembling and consolidating under-utilized sites in the New Territories is too much hassle. But seriously, how much hassle is worth half a trillion? This is like buying a far pricier apartment to avoid having to clear out a spare room full of junk.

Some minor bureaucratic mendacity is backfiring nicely here. For years, officials have split and recategorized various funds to make the city’s accumulated surpluses look smaller than they really are. If they had been honest, they could now have been proposing to blow a mere quarter or a third of our savings on this boondoggle – but they massaged the total from HK$1.5-2 trillion down to HK$1 trillion, so now they must live with the mega-reclamation scam swallowing ‘half our fiscal reserves’.

That’s enough to enrage an average household. These protestors and their kids are also clued up about the environmental side, notably the rising sea levels that make this project look like a seriously dumb gamble. 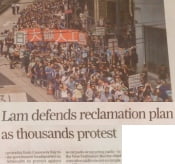 On top of that, maybe more and more people are getting the message that the whole housing/land problem is a con. Post-1997 administrations have created a housing crisis by design – to enrich cronies and/or to fulfill Beijing’s long-term demographic and integrationist strategy. The government now seeks a fake ‘solution’, which will also happen to enrich cronies and/or further ‘One Country’ policy.

The anti-‘Lantau Tomorrow’ march was not huge, but it should worry officials trying to push the ‘half-trillion paddling pool’ project.

That’s assuming they really are trying to push it. The whole idea almost looks too preposterous to be real. In proposing it, Chief Executive Carrie Lam is side-lining her own pet (rigged) task force on land supply with its own smaller-scale reclamation concept – a strange breach of her usual bureaucratic procedural inflexibility. The apparent mastermind of the extravagant Lantau mega-vision is ex-CE Tung Chee-hwa’s Our Hong Kong Foundation tycoon think-tank, which enlisted pop star Andy Lau for an easily-mocked intelligence-insulting promotional video, which smacks of desperation.

Something smells weird here. Plenty of conspiracy theory, like the male cabal backlash against Carrie (though she could be setting them up). Unexpected popular opposition adds spice to the mix.

This looks like the supreme test for seasoned cynical skeptics: do you believe Beijing, the ultimate ruler in all matters, would sanction such an egregious and deranged way to hijack Hong Kong’s wealth – or could the CCP think of something better?

6 Responses to Trying to take the half-trillion boondoggle seriously