Sometimes mocked (like much of the Hong Kong media) for pro-Beijing bias and tycoon-ownership, the South China Morning Post receives a credibility-boosting badge of honour from blunt-spoken government supporter Arthur Li – who labels the paper ‘fake news’.

The question is whether the SCMP accurately quoted departing Hong Kong University head Peter Mathieson. When I read the original article, I remember getting the impression that Mathieson implied that Beijing’s Liaison Office frequently meddled. This was probably because the opening paragraph said:

The outgoing head of the University of Hong Kong has described his tenure as filled with “pressure from everybody”, saying that apart from local officials, he was also given advice “all the time” by Beijing’s liaison office.

Li essentially claims that the SCMP ‘conflated’ Mathieson comments. We would expect a groveling apology, but maybe the boss is away or something and the SCMP admirably stands its ground in response – even though the transcript suggests Li has at least a partial point. A pro-journalistic argument might be that Li is confusing the concise crafting of an enticing lead para with ‘conflation’.

Even if Li is right, however, no-one disputes that the Liaison Office has been ‘advising’ HKU leadership. That is the substance of the story.

Officially (traditionally/in-your-dreams), the Liaison Office’s role is to be an intermediary between the national and local governments, and to help smooth Mainland-Hong Kong relations in discreet, positive and benign ways. Officially (etc), Hong Kong universities are completely off-limits to Communist Party influence. Officially, then, local academic institutions should perhaps be ‘advising’ the Liaison Office – but not the other way round. Obviously, this is not the case. This is not ‘fake’ news. It’s not news at all. 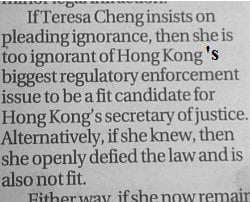 Liaison Office will call soon with some advice.