It’s not often that lawmaker and wannabe Chief Executive Regina Ip plays the vulnerable victim. The ex-Security Secretary is more comfortable as the whip-wielding iron butterfly leaving foes in chewed-up pieces in her wake. But here she is accusing the Link real estate investment trust of threatening to evict her party’s members from their premises in the company’s property in retaliation for her criticism of its management of retail malls.

The Standard headline about the Link ‘trying to silence’ Regina Ip captures the implausibility of this scenario. She is surely exaggerating for effect. By acting as the one being bullied, she is turning the tables on the Link Reit, leaving them and the alleged go-between columnist Simon Lee scurrying for cover. Mega-landlord – consider your head bitten off. Don’t mess with Reg. 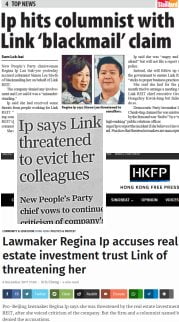 The Link Reit is a problem that won’t go away. The portfolio of shabby low-rent shopping malls and car parks attached to public housing estates was privatized under Tung Chee-hwa in the early 2000s. (The crop-haired one thought privatization would make him look Thatcher-cool – thus also the MTR flotation. We might also consider that the subsidized retail complexes competed with Beijing’s co-opted property-giant buddies. For small MPF savers and retirees, it is a dependable utility-like investment.)

The new profit-driven owner started to upgrade the malls. Among the improvements were noticeably more hygienic wet-markets. But the managers also put previously-peppercorn rents up, and this led to some traditional mom-and-pop stores closing, big chains moving in, and – in some cases, according to the anguished complaints – impoverished public-housing residents being forced to travel miles for affordable sustenance. The Link has therefore become demonized as a heartless and cruel exploiter of the downtrodden.

The company recently decided to sell a large chunk of its portfolio to a consortium. They thus cash in while real-estate prices are inflated, and divest themselves of the political burden. Activists are warning of the death of communities as the new management hikes rents in order to get a return on their insightful/bold/stupid investment. Politicians are echoing them – and this is where Regina comes in.

Columnist Simon Lee defended the old and new landlords on basic classical-economics grounds. He and a former Link boss have or had connections with the pro-free markets/libertarian Lion Rock Institute. Nothing sinister in that, but it highlights the real flaw in both pro- and anti-Link arguments.

Free-markets principles make sense in free markets. But what do we have in Hong Kong? The government owns all the land, keeps it in artificially short supply, and allows a cartel to dominate much real-estate. And then – as if the retail property market were not sufficiently distorted – the same government crams in millions of ‘tourists’ who are mainly shoppers of certain goods arbitraging a protected market of 1.3 billion next door.

Libertarian waffle about how we must ‘stop glorifying and encouraging business failures’ is meaningless on such a tilted playing field. So is populist demonizing of the Link – a government-created entity partly owned by many of us. The problem is Hong Kong’s cartelized semi-feudal stitched-up crony-riddled travesty of capitalism.

(My favourite definition of libertarianism: ‘Astrology for men’.)

6 Responses to Reg vs Reit