Lam to the slaughter

Up to last week, Hong Kong had not been untouched by the worldwide eruption of populist revolts, celebrity deaths and general mayhem that is 2016 (of which 18 days are still to come). Chief Executive CY Leung started the year by dedicating his entire Policy Address to the mystical ‘One Belt One Road’ phantasmagoria; subsequent months brought (among other extreme events) the Mongkok Fishball Riot and the introduction of de facto religious tests to keep localist heretics out of public office.

So – after a relaxing weekend to absorb the news, it doesn’t seem so surprising that Beijing has tossed CY aside. The time had come. With Hong Kong’s ‘elite’ squabbling, it was either that or signal that CY would get a second term as Chief Executive.

There are all sorts of possible factors at play, such as infighting within the Communist Party, even Chinese leaders’ nervousness at the prospect of President Trump stirring up the Empire’s splittist fringes. The timing particularly suggests a degree of panic ahead of yesterday’s Election Committee Subsector elections – a charade that only a bunch of Leninist control-freaks could take seriously. Pro-democrats, property tycoons and reluctant hyper-moderates all saw the rigged-poll-for-a-rigged-electoral-college as an opportunity to send an anti-CY message. (You can view the ‘manifestos’ of the candidates in David Webb’s 1,539 candidates in under 4 minutes video.) The danger was that only the bare inbuilt majority of automatons on the body would deliver CY their 689 or so votes; faced with such a flimsy and humiliating semi-endorsement, the Commies flinched.

Proof – yet again – of two things.

One: Hong Kong public opinion, manifested in various ways, can influence/intimidate the Chinese government. CY joins Tung Chee-hwa as the second of three CEs sacked by the Hong Kong people. Bear in mind the role played by ‘failed’ youthful rebellion: CY sealed his own fate through idiotic opportunistic reaction to the Occupy/Umbrella movement and the radical lawmakers’ Oath-gate saga. (To put all this another way, beneath the big tough mighty exterior, Beijing is paranoid and frightened – a typical bully, or empty vase. If Hong Kong can push the tyrants around, so can others.) 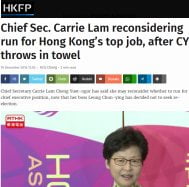 Two: the Chinese Communist Party has no loyalty, gratitude or debt to anyone. CY Leung has served, groveled, kowtowed, obeyed and self-flagellated for the CCP and New China for over 30 years. In the space of minutes on Friday, they stomped on him and chucked him out with the trash. Every supercilious lick-spittle shoe-shiner out there can expect the same treatment the moment they have no further use. And you are either that, or a free human who is ‘hostile’ to the regime: there is no middle ground. The CCP is a conveyor belt leading to a teeth-kicking machine. Now, Carrie Lam steps up through the John Tsang/Regina Ip Me-Me-Me hullabaloo to be next.

13 Responses to Lam to the slaughter