I like Hong Kong’s pro-Beijing rallies – they make you feel so young, worldly, handsome, well-dressed, and blessed with free will. And at yesterday’s gathering in support of the Chinese government’s ‘interpretation’ of the Basic Law and against Hong Kong independence, the United Front pulled out all the stops.

While the organizers’ claim of 40,000 was an exaggeration, the turnout certainly hit five figures. And unlike with some of the anti-Occupy gatherings in 2014, the crowd looked a bit more authentic.

My brief survey revealed few if any Indonesian ladies, Pakistani illegals or other obviously non-credible marchers-for-rent, and not too many late-stage dementia cases dragged out of nursing homes. Plenty were clearly bussed-in from the Mainland, and most of the rest were gnarly rustic types mobilized for a rare trip to the urban areas. No doubt many were paid to turn up, but I would guess that at least half had a clue as to why they were there, and some were sincerely riled about Hong Kong’s unpatriotic splittist radicals.

The good news is that if this is the Communist Party’s authentic power base in Hong Kong, it is a sorry sight. It is a different planet from a pro-dem protest. While typical localists – we are often reminded – are too young to remember British rule, most of this pro-Beijing demographic will hit average life expectancy in a decade or two. From that, we can infer a significant gap in educational standards and worldview, and perhaps wit and verve. Without wishing to be churlish (and allowing for the age difference), the pro-interpretation folk brought an unmistakable ugliness into town. No fault of their own, maybe, but they are a scowling and grumpy or just plain nasty bunch. Lacking the nerve to point a phone at the Really Scary ones, I captured only the photogenic.

The nearest the pro-Beijing camp could get to youthful, sophisticated and hip were the politicians who were wheeled in to recite the official lines…

It would be impossible to make Maria Tam glam, to bring out Priscilla Leung’s inner cute babe, or to turn intellectual mouse Michael Tien into a rabid firebrand. But in these surroundings, with their limited time-span, you get a glimmer. And, apparently, this is the best the United Front can do. 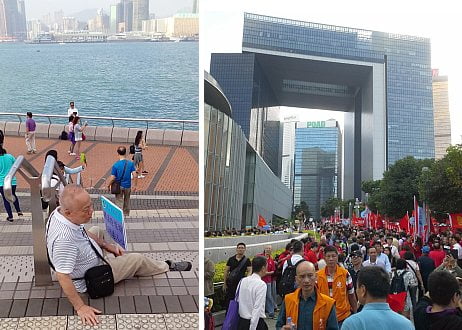