The urge to purge

Are the Chinese and Hong Kong authorities so paranoid or stupid enough (respectively) that they would use mumbled/bumbled/fumbled oath-taking as an excuse to eject another dozen or so pro-democrats from the Legislative Council? Evidence that they are comes in the form of a menacing Mainland legal official who estimates that 15 members could be disqualified. Skeptics might point to that patriotic taxi union boss filing a lame-stunt judicial review.

The pro-dems in question gather round podiums to do their depressing pitiful-morose-doomed victims act. Deep down, they should be hoping that the government does purge the legislature of half its democratically elected opposition members. The city’s ruling order would be taking what little credibility and legitimacy it still has and handing it over on a plate to the Long Hairs, Nathans and Eddies for whom hundreds of thousands voted.

People who take our rigged institutions seriously might fear that the administration would take advantage of a depleted legislature and push through, say, Article 23 national security laws. In reality, moderate pan-dems would probably boycott the proceedings or even resign their seats and gum things up. But the outright rejection and alienation of over half the electorate would kill any remaining pretense that the Hong Kong government ‘serves the community’.

As things are, Beijing is determined to expel the Youngspiration duo, and possibly one other young localist, for oath-taking failure. If the courts play along, it will be a classic United Front-style success, with two enemies of the state isolated and crushed, and the broader opposition divided, while the masses believe the pair deserved it and brought in on themselves. Attacking a Hong Kong national treasure like Long Hair – adored by rich and poor, young and old – would have the opposite effect.

Although we refer to the administration of Chief Executive CY Leung as a junior mover in all this, it is as much a casualty of the Leninist bullying as anyone. The word is (and plain observation confirms it) that one minute Justice Secretary Rimsky Yuen and buddies sincerely wanted and expected the Youngspiration Oath Outrage to meander its way through our dependable and valued courts, the next minute a top Beijing official has lost all patience and angrily swatted the hapless local functionaries aside with an instant ‘interpretation’.

Exactly why Beijing freaked out this way – over a couple of weedy HK geeks – we cannot say. The theory that Hong Kong is being used as a weapon in a Zhongnanhai power-struggle or blame-shifting brawl sounds as good as anything. The other explanation is that Xi Jinping’s regime, petrified by looming economic disaster and enemies everywhere, is so insecure that it genuinely perceives Hong Kong localism as the harbinger of the collapse of Communist Party rule.

One thing that is clear is that the Chinese leaders are not thinking things through. Even the surgical removal of the Youngspiration duo from the legislature does nothing to eliminate separatism, and probably boosts it. Removing opposition lawmakers undermines rather than bolsters the local government’s authority. More legal actions and two or 15 by-elections are not what officials need right now. Article 23, should it rear its head, poses a greater threat to the administration than it does to civil rights. And in the midst of the mess, the Chief Executive quasi-election and either the reappointment of CY Leung or an even less thinkable alternative. Oh, and they’re watching it all over in Taiwan.

The declaring of the weekend open is in silence today. For anyone interested – the NYT gets onto the (whiny and defensive-sounding) Asia Society Umbrella movie story. 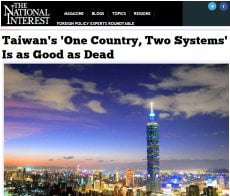 12 Responses to The urge to purge