In an attempt to control its housing bubble, the Mainland city of Jinan in Shandong has barred people who already own three properties from buying any more. Sounds a bit late in the day – but at least they’re trying to do something. The Hong Kong government’s reaction to spiraling property prices is to sit on its hands and grin helplessly.

Oxfam bemoans Hong Kong’s growing wealth gap, with the richest 10% now earning 29 times what the lowest 10% get. Richard Wong thinks this is an exaggeration and sees demographics – like the rise in the number of small elderly households – making things look worse than they are.

Much of it comes down to housing costs. It is perfectly possible for a family living on HK$10,000 a month to have higher purchasing power than a family on HK$20,000 – if the former are in public housing and the latter are paying private-sector rent or a mortgage. Public housing is so cheap that many university graduates deliberately take low-paying jobs for a few years to qualify for it: the long-term savings once they secure their subsidized unit will be far higher than the short-term opportunity cost. With private housing costs sky-high, this is a smart tactic.

If middle-class kids working the system to get public housing are the winners, the losers are the poor who are in private housing – the wretches stuck in shockingly expensive sub-divided cubicle-firetraps. A letter in today’s South China Morning Post suggests the conversion of empty factories, schools and other buildings for housing. An obvious stopgap solution to the housing problem is to regularize illegal dwellings in industrial premises, rooftops and so on – ensuring basic fire safety while ignoring all the other zoning, planning, premium and other bureaucracy. But the government’s policy is to do the opposite: clamp down on illegal apartments in old factories as if the tens of thousands of inhabitants have somewhere else to go.

When CY Leung became Chief Executive in 2012, there was talk of emergency housing measures (adapting disused buildings, putting prefabricated shelters on vacant land). Presumably, the idea was thrown out by civil servants who thought it was too much like hard work for them; certainly some top officials feared it would ‘encourage’ listless, scrounging riffraff to move into bad housing in order to be resettled. There was probably also an assumption that a 1998-style correction would soon come and fix things.

In theory, CY has made increasing long-term housing supply his Big Thing. In practice, he complains that it is impossible to find the necessary land – except by taking green-belt areas or, incredibly, sports and recreation facilities. Meanwhile, of course, the Heung Yee Kuk can occupy their brownfield sites, and the property giants can hoard land and unsold units for as long as they please.

Despite this supposed shortage of space, not a week passes without a government land auction. The property developers will use the lots concerned for ‘luxury’ apartments, presumably aimed at Mainland money-launderers to keep empty. No-one asks how this is possible when we have this dire shortage of land (let alone how it is supposed to benefit Hong Kong).

At the same time, tens of thousands of (mostly low-educated) Mainlanders get their one-way permits every year to come to settle in Hong Kong. It is not politically correct to mention this, though Richard Wong is pretty blunt about the impact on our poverty statistics. These are the same people who end up in the appalling subdivided housing. It is reasonable to ask why this influx is allowed to continue if – as the government insists – we do not have enough land/homes for them to live in. (If you press officials, they will say something along the lines of ‘we need the children’ who make up many of these newcomers. We can guess that from Beijing’s point of view, such migration will dilute the tiresome native population here, just as it will in Xinjiang and Tibet. Even squeeze them out into Nansha.) 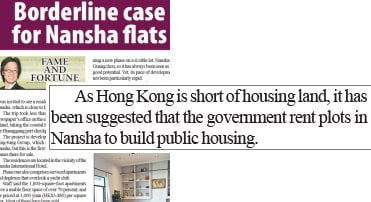 The 1998-2003 crash coincided with a major increase in housing supply masterminded by one CY Leung. As many observers point out, Hong Kong does not have an actual shortage of housing units, just a shortage of affordable homes. At some point, bubbles have to end and asset prices have to match what end-users are willing to pay. The sitting-on-hands-and-grinning-helplessly policy goes on.

While we wait, great moments in lateral thinking: a hotel guy suggests that the government allow people to buy and sell hotel rooms as permanent housing…

To the extent that this would increase supply and soften rents in serviced apartments, with a (marginal) knock-on downward effect on other apartment rents, this is not a bad idea. (Essentially it returns space allocated to the all-important tourist industry back to Hong Kong people.)

But what he probably has in mind is simply enabling hotel rooms to become an investment asset class for Hongkongers whose pathological lust to own real estate is currently thwarted by unaffordable prices for residential, commercial and of course car parks. If it makes the suckers feel better – why not?