And winner of the Ten Outstanding Tedious Events is…

You would expect the South China Morning Post to line up loyally behind the latest official Big Important Thrilling BS Concept-Theme – whether it’s ‘Belt and Road’, ‘positive energy’, Yuan hubs or the latest regurgitation of some tourism/landlord-worship meme. So it comes as a bit of a shock to find the paper treating this year’s Ten Outstanding Young Persons Award with less than total reverence.

As the Standard also notes, one of the winners – a Fonia Wong – is connected with one of the judges and is outstanding mainly for having made big bucks as a student in multi-level marketing and property.

Run by the Junior Chamber, the Award is aimed at recognizing the Hong Kong establishment’s idea of excellent role models. The procedure is: one dedicated unsung-hero teacher; one handicapped-but-photogenic overcomer-against-odds; one tycoon’s offspring (or product of that milieu); one sports medal winner; one or two entrepreneur-ish types; one (respectful, decent, non-challenging) artist or musician; one (constructive, cooperative, non-campaigning) environmentalist or community worker; a nurse who spent time in Africa; and a few more business types. In highlighting the ruling class’s notion of the ideal non-troublesome young (-ish) Hongkonger, the Award co-opts emerging figures and gives face to select parents.

Money-making Fonia is an executive at a subsidiary of one the city’s biggest family-run property empires and is 40 years of age, and so fits the bill perfectly. Traditionally, the media would give the Award modest but straight coverage. The real story here is that her selection as one of our Ten Outstanding Young Persons is attracting mockery. It is another sign that the old order in Hong Kong is dying, respect for elders and betters lies in tatters and our social fabric as we used to know it is being torn asunder, etc.

(Only five were awarded this year. Perhaps we are supposed to infer establishment displeasure and despair at the radical localist teen menace in our midst.)

What if the public chose the winners? Obvious recipients would be world-famous Joshua Wong, his sidekick lawmaker Nathan Law, the young directors of the vignettes that comprise the film Ten Years, the activists who stand up to land-grabbing thugs in the New Territories, the zither-carrying schoolgirl who faced down the MTR, the lunatics who take selfies atop skyscrapers and thousands more whose names we’ll never know.

Not content with denigrating the Ten Outstanding Young Zombies Award, the SCMP also fails to admire and idolize the tourist-attracting pestilence that is Formula E – an electric-car race and classic example of what we mean by the phrase ‘regurgitation of some tourism/landlord-worship meme’.

The paper upset the organizers of this pseudo-event by pointing out (along with everyone else) that right-thinking members of the public resented the visual barriers strung up along the walkways near the race circuit. “The media have a responsibility to sell the product,” said some self-important nonentity flattered by Hong Kong tourism officials chucking taxpayers’ resources in his direction. And today a columnist questions Formula E as a sport, declaring it a lame, non-glamorous, unexciting, sub-go-karting waste of space.

Formula E is obviously a desperate attempt by some shysters to replicate the astounding money-making success of Formula 1 (itself, like most professional sports, contrived and tedious but at least noisy). Only Hong Kong officials are gullible enough to take it seriously – and massively inconvenience their own public in the process.

I was herded through the affected afflicted area over the weekend, and proudly present…

Later, on an inspection tour of Discovery Bay, I passed a bar with a big outdoor TV showing the electric go-karts hissing uninterestingly around IFC. Three or four local residents sat nearby, sipping beer and occasionally glancing up at the racing. They told me they thought it was boring. 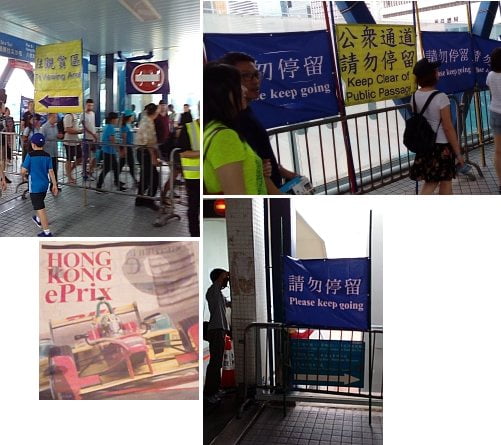