CY reaches for the elephant gun

Hong Kong Chief Executive CY Leung goes a bit Lee Kuan Yew, firing off a snotty-sounding lawyers’ letter (partly here and here) to Apple Daily. He is threatening to sue the tabloid for calling on lawmakers to investigate him for corruption in connection with his
HK$50 million no-compete payment from Australian company UGL in 2011. This, he
claims, could damage his chances of a second term in office as CE. (At least it distracts us from the uncovering of a second case of letting the Heung Yee Kuk dictate housing policy.)

So far, so inadvisable. But he then gets all whiny and nitpicky (in true Singaporean style), accusing the paper of committing an offence under the long-disused Nickname (Disdainful) (Use of) Ordinance, passed way back in 689. 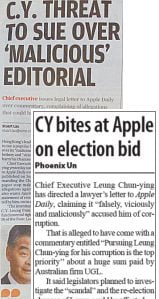 Apple Daily, it goes without saying, gleefully tells him to get lost. (For some lawyer-speak on the potential difficulties of a CY libel action, see here.)

So we can come to several conclusions (aside from the already obvious fact that CY wishes to stay in office for another five fun-packed years). First, although his UGL payoff was probably legitimate, he fears accusation of wrongdoing. Perhaps he has consulted with an expert practitioner of the ancient Chinese science of face-reading who has calculated that Leung has a shifty and baleful visage that might lead people who don’t know any better to see him as untrustworthy. Second, CY is, perhaps surprisingly, rather sensitive about such insulting phrases as ‘wolf’, ‘liar’ and even the – entirely factual – ‘689’. (I’ve always thought he was the type who got a thrill out of being likened to a wild ravenous beast of the night, but it seems not.)

His lawyers have essentially written an open letter to opposition politicians, would-be rivals, hostile media operators and the rest of us, specifying how to upset CY Leung if it becomes necessary, or just for amusement or whatever.

On top of that, there is the undeniable fact that threatening to sue the trashy gutter press – however justifiable – makes you look like a loser. Suing a tabloid? How pathetic. A public figure who allows himself to be goaded in this way is proving his tormentor correct. Indeed, it is one of the later stages in the life-cycle of the failed celebrity.

There’s an old saying: ‘See someone once [for the first time in ages], see them again [soon after]’. Thus it proves with Ronny Tong, hyper-centrist lawyer/politician, last seen just yesterday helping his daughter-in-law out with a HK$65 million apartment. He instantly crops up again, this time hobnobbing with HK and Macau Affairs Office guy Feng Wei in Shenzhen. He informs the Beijing official that it might be best if CY doesn’t get a second term. Will CY send Ronny legal threats too?

Can you imagine the impact in Zhongnanhai? ‘Memo to Comrade Xi: New important moderate in Xianggang Ronny says ditch Leung. Suggest we take his valuable advice. Rgds, Feng.’ No, nor can I.

Accompanying Ronny was one Tik Chi-yuen of the staggeringly insignificant Third Way grouping. Despite failing in the elections a few weeks ago, these sensible meek-and-mild non-extremists at least get a pat on the head from Beijing. I declare the weekend open by awarding them the Most Underwhelming Endorsement of the Month. Feng, reports Tik, ‘was supportive and said it might take a few more years for [the] middle-of-the-road force to see more influence’. (Feng wins Most Contemptuously Dishonest Impression of Being ‘Supportive’ Prize.) Consider yourself neutralized by the United Front.

6 Responses to CY reaches for the elephant gun