HK people – to be made into food or not? 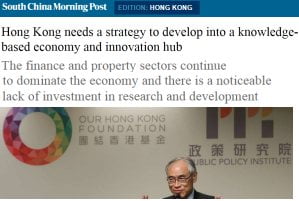 At least once a week, pro-establishment voices tell the people of Hong Kong that their city must become a ‘knowledge-based economy and innovation hub’ (in this case a South China Morning Post editorial echoing a tycoon-funded think-tank’s blather about strategic vision, tech, etc). These regular exhortations include warnings about Hong Kong’s ‘dependence’ on property and finance.

This is strange, ironic or plain hypocritical, as the tycoon-establishment doing the talking is essentially the same property-based cartel system (with adjuncts in finance, tourism, infrastructure) that corners the domestic economy. These interests are on balance parasites on the real economy and general population. They are the least innovative or competitive players in town – and it is they who are ‘dependent’ on Hong Kong, not the other way round.

The old-style tycoons and bureaucrats are calling for ‘knowledge-based innovation hubs’ out of fear and desperation. They sense that factors beyond their control, like an angry local population and a less-sympathetic Chinese Communist Party, threaten the whole rotten property/retail/utilities pyramid scheme. They are pretending to embrace change in an attempt to manage and minimize it.

Another factor beyond their control is the tycoons’ own aging and eventual deaths. New World property dynasty founder Cheng Yu-tung is the first of a whole string to go. Another (smaller) variable would be the relative dimwittedness of their offspring next-generation of moguls.

SCMP columnist Peter Guy offers a bold/provocative/fantasy vision of what happens next to Hong Kong. He notes that the feudal/extractive nature of the establishment’s high-rents/unaffordable-homes model is unsustainable politically and economically. However, he believes that the property dynasties have acquired so much wealth and power that the next generation will nonetheless continue to force it upon the city. This contradiction will be resolved by emigration of younger talent from the city, with Beijing replacing the population loss with a higher inflow from the Mainland. The new arrivals being even less able to afford local housing, they cram themselves into even tinier apartments than today’s 180-sq-ft units. (These last two points are omitted from the SCMP print edition.) Hong Kong ends up like the movie Soylent Green, in which the people are used as food because, Guy says, ‘there is nothing left to generate sustenance’.

The big possible flaw in this scenario is the younger-generation tycoons seamlessly inheriting their fathers’ feudal grip on our city. There are already signs that Mainland companies are muscling in on the cartels’ territory. Either way, Beijing – not tycoons’ kids – will decide whether Hong Kong remains dominated by favoured parasite sectors, or whether the playing field is leveled to give local consumers and entrepreneurs a fairer deal.

In national or global terms, the billions a feudal Hong Kong can yield favoured companies is relatively small change, so this is likely to be a political decision based on how best to control a troublesome city. If the localists and radicals continue to act up, Beijing might be rational and go for the ‘level playing field’ option. Otherwise, the grinding-people-up-into-edible-powder scenario looks like quite prescient.

6 Responses to HK people – to be made into food or not?