Hong Kong’s recent Legislative Council elections prompted international attention and interesting analysis (here, here, here, here, here, etc). A common theme running through these accounts is that the more Beijing tries to tighten control, the more Hong Kong resists. This is part of a broader pattern of cluelessness by Chinese policymakers, who in recent years have succeeded in spreading suspicion and alienation among audiences in Taiwan, around the South China Sea, among Western countries’ inward investment authorities and elsewhere. 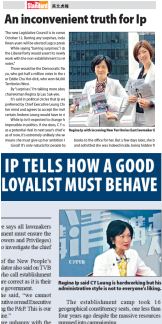 Many overseas observers see a mismatch between the nationalistic pride Beijing wants to inspire among its own population, and the respect and influence it yearns for in the outside world. Some go further and believe that China’s leaders have succumbed to their own propaganda and perceive every slight and setback as proof of a global conspiracy to deny the country its due.

In Hong Kong, the Communist Party’s supporters are oblivious to such worldly perspectives and spout markedly parochial official lines to explain local hostility towards creeping Mainland influence. Some are crass – like the idea that Hongkongers are resentful because their cousins across the border are less impoverished and backward than they used to be (an argument that sounds like Mainland officials projecting their own shallowness). A slightly more subtle approach is to lament the fact that Beijing has ‘lost confidence’ in Hong Kong.  The more sophisticated loyalists frame this as pleas for ‘both sides’ to build ‘trust’.

The implication is that the people have the responsibility and duty to win the confidence of the government, rather than the other way round. This is absurd, but since the Communist Party is infallible, no other explanation makes sense. And if you want or need to ingratiate Beijing, the logic must be compelling.

Which brings us to the subject of Regina Ip – a classic example of a pro-Beijing shoe-shiner who will blame Hong Kong people for not appreciating, indeed enjoying, enormously crap leadership. The former Broomhead/Security Secretary was the biggest vote-getter on Hong Kong Island last week, in a 16%-of-the-vote sort of way. This should have been the crowning achievement in her career as a legislator, opening the door to her ultimate goal of becoming Chief Executive.

However, that is not how things are working out. She must finally be realizing what the rest of us have known all along – that she is not in the running.

The election results reflect a transition in Hong Kong. The shift towards localism and a younger generation is an abandonment of old pretenses that Beijing is essentially benign, and can be trusted. Beijing is now showing its true character, and Hong Kong is shaking off any illusions it had. Localism, despite its name, is about seeing Hong Kong in the context of China abusing everyone – from Taiwan to Southeast Asia, and so on. Regina, for all her apparent hard-headed realism, struggles to keep up.

She has been caught lying about her post-election visit to the Liaison Office (a cynic would suspect that the Beijing officials set her up), and is desperately trying to avoid being neutralized as Legislative Council president. To claw back a few brownie points, she is declaring that loyalty requires lawmakers to oppose investigation of the Chief Executive.

There is a tortuous theoretical link, in that the death threats seem to result from Chu’s allegations that the New Territories mafia managed to veto a government plan to build public housing in a location that didn’t suit them. But Regina, in her confusion, was apparently/clearly suggesting that Chu’s (maybe dramatized) intention to squat in the LegCo building would be unnecessary if his family could escape death threats by fleeing to – say – a weekend apartment on Lantau.

The story has mysteriously disappeared from the SCMP website. Some advanced Googling suggests that it shriveled up overnight into a mere sentence (second para from the end) in a story about Chu’s allegations. That story – about Beijing co-opting the bad and alienating the innocent – is of course far more important than Regina Ip. The point is that maybe Regina herself has finally worked that out.