Posted on September 2, 2016 by biglychee 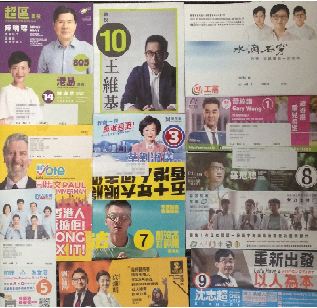 The missing ones are: two eccentric independents who probably can’t afford publicity materials; the Communist-front Federation of Trade Unions, who are of limited appeal in my neighbourhood; and the once-mighty Democratic Party. Maybe the DP’s flyer ended up in the trash along with the pizza-delivery brochures, but it would be fittingly tragic if they had despaired and not bothered.

Other constituencies have even more seats and even more candidates. Here’s a complete list, and here’s a guide to the deliberately deranged voting system. For those in need of guidance or inspiration, there’s even a (debatable) selection of recommended candidates for each geographical constituency.

The voting system encourages a multitude of candidates, and the Communist Party’s United Front carefully coordinates pro-Beijing parties to maximize the number of seats won. So in Hong Kong Island – a haven of bourgeois decadence with few grimy public housing estates or Mainland immigrants – there is the DAB for the elderly/less-educated, the aforementioned FTU and Regina Ip’s more middle-class New People’s Party.

The hopelessly disorganized pan-democrats are fielding nine candidates/lists in the constituency. Even if the majority of electors back them, the pan-dems will probably splinter and cannibalize the vote and take only a minority of seats. Like the pro-Beijing camp, they could merge into three flavours: traditional-moderate, traditional-radical, and new-radical-localist. Instead, just the first of these segments have four candidate lists: the Democratic Party, the Civic Party, an ex-Civic Party independent, and the Labour Party (and we’re not counting an ultra-moderate Civic Party splinter). This is so dumb, they deserve to lose. (You could quibble about the categories – eg whether Labour is ‘traditional moderate’ – but that’s the point: they overlap across the spectrum.)

Some number-crunchers believe that the perverse voting structure will leave the composition of the Legislative Council much the same as before. But certainly the race itself is different this time round because of the rise of the localists, and the backlash against the Mainlandizing, Communist threat under CY Leung, the Liaison Office and Xi Jinping’s Beijing.

maintain their current share of the seats in order (for example) to veto another attempt at quasi-political reform or to continue being able to filibuster government initiatives. Essentially, they believe LegCo is still important, and it is still possible to counter Beijing’s creeping despotism through constitutional means. Indeed, they dream of spreading democracy throughout China.

The localists are more likely to see the rigged, powerless LegCo as yesterday’s thing – and they certainly don’t care about whether the Mainland has democracy. They are teenagers and 20-somethings, and divided into even more groups than the old moderate pan-dems, with varying degrees of squabbling and mutual affinity according to how much and how quickly they want Hong Kong to be an independent nation.

They have noticed that the traditional Martin Lee/Long Hair-style petitions and marching don’t work. They have experience of direct action over National Education, Occupy and even fighting the cops on the street in Mongkok. To some of them, the prospect of a Beijing-dominated LegCo ramming through Article 23 security laws against majority public opinion probably looks like a gift and a welcome invitation to greater defiance. Unlike the older generation, they want and know how to scare Beijing.

Compared with the past, this LegCo election has brought far more allegations of intimidation and cheating. And of course there’s the sloppy screening-out of pro-independence candidates to further reduce the integrity of the process. It’s possible the courts will order fresh elections, which would prompt some serious hitting-the-roof mouth-frothing from Chinese officials – with all that implies for local harmony and healing the divisions in our community.

It is probably best to see this election as an effect of what is happening rather than a cause. Watch the basic numbers: the turnout, the total percentage of the vote going to pan-dems, and the share of that going to localists.

I declare the weekend open resolved to add my contribution to that last number. 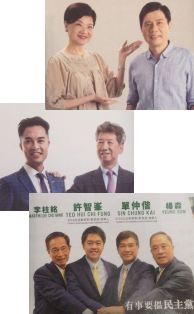