Four years ago, Hong Kong managed a reasonably sincere, if not terribly rapturous, welcome for the glorious motherland’s victorious athletes. Since then, a pro-independence movement –or at least something that insists it is one – has sprung up in the city, and the authorities are freaking out.

The government must have held a mini-conference with the title “Presence of sporting heroes: threats and opportunities”. To counter either an embarrassingly low turnout or rampaging hordes of splittists gatecrashing events, officials switched to a smaller, more controllable venue (which naturally has to be named after Queen Elizabeth) and searched everyone’s bags. They also placed tight security around the athletes’ hotel. To maximize warm and cuddly positive energy, they arranged for bronze-winning swimmer Fu Yuanhui, of inane-grinning fame, to join the otherwise docile stars.

Following an extravagant welcome at the airport (red carpet, police band, Carrie Lam), the athletes did various shows, one of which involved mass skipping – as in skipping ropes – greeted by squeals of delight and amazement by an easily impressed crowd. The audience included many elderly folk, some apparently rather bemused at being there first thing in the morning for the lengthy check-in procedures. (Video conveying tortuousness of the extravaganza here.)

It would be heartwarming to report that Hongkongers were so enraptured by feelings of unity with China that they came to the show in Mainland-looking hairstyles and clothing, and carried signs in simplified characters. But the South China Morning Post spills the beans, deep inside its story, mentioning that Mainlanders ‘abounded’ – though we could be generous and give honorary Hongkonger-status to one of them for being called Sybil… 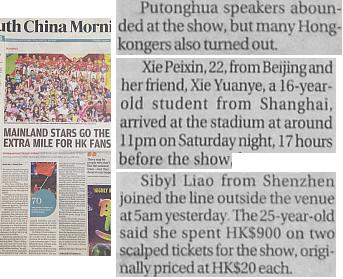 The opportunity to win local hearts and minds was bound to be limited. To guarantee maximum alienation of the community, the poor athletes were required to recite cringe-making gibberish about how everyone is the same Chinese family. (Communist Party obtuseness at its finest here: if they had let Ms Fu loose on the streets to tell everyone about her periods we’d all be rushing out to vote for Starry Lee on Sunday.) More fictitious puke on athletes spreading national identity in Hong Kong over at Global Times.

But, as befits a fake and contrived occasion, the celebration presented a magnificent chance for United Front shoe-shiners to prove their loyalty by chucking money away on full-page ads in the newspapers. Very Mainland-style ads (I suspect the artwork is from over the border). So it wasn’t a total waste of time… 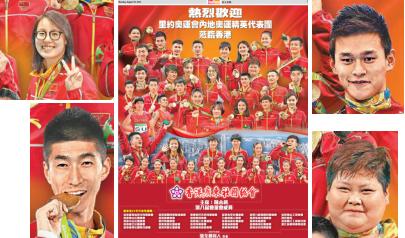