Put yourself in Beijing’s shoes…

The exciting new video from China’s top investigative and prosecution body suggests that activist Joshua Wong and other fighters for democracy and human rights in Hong Kong, Taiwan and the Mainland are part of a US plot to destabilize the country. That’s right: China identifies scrawny Hong Kong teen geek Joshua as a threat to national security.

Our inclination is to shrug and say “Well, they’re just saying that because…”, and then add a sort-of convincing reason why the men running the second-biggest economy in the world would go around pretending to fear some gawkish nerd-boy protestor. The alternative is to conclude that the decision-makers in Beijing have lost, or never had, a grip on reality – and obviously they can’t be that out of it, ha ha.

The fight against Hong Kong’s supposed independence movement can also be seen as contrived – part of the bigger xenophobic narrative and bluster to remind the masses how badly they need the loving protection of the Communist Party regime. Certainly, the 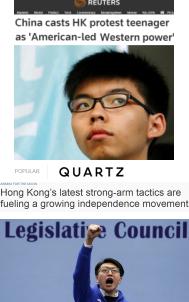 bosses of the local Liaison Office have career-related motives to exaggerate and even build up the splittist threat here, so they can prove their worth to Beijing with a high-profile campaign to counter it.

Yet the measures to prevent some individuals from running in September’s election are so hasty and clunky and absurd that they actually have an authenticity about them. If China’s officials were doing this for show it would look less idiotic. We can therefore speculate that, in fact, someone very high up in Beijing really, genuinely believes the Western world is right now actively attempting to topple the party and dismember the state, as per the USSR, etc. The above-average viciousness currently being meted out to human rights lawyers in the Mainland suggests this-is-not-a-drill panic.

So why doesn’t China come out with it? Why not recall the ambassador from Washington DC, threaten to suspend diplomatic relations and/or openly charge the US with trying to overthrow the government in Beijing?

The video – and so much other Chinese official whining about the West trying to hold the country back/down or encircle it – does not openly accuse other states of what we would consider hostile acts. But nor does it distinguish alien ideas from foreign government policy. In China, the Communist Party decides and disseminates the only acceptable philosophy, books, values and narratives, from the sanctity of one-party rule to historical fact to all the ‘China Dream’ aspirational stuff. To today’s leaders in Beijing, presumably, ‘Western’ concepts like democracy, rule of law, human rights and other culture and thinking are also assembled and packaged by some state message-management monopoly as tools to maintain and extend power.

So a kid in Hong Kong spouting democracy is by definition a dangerous weapon of a hostile foreign country. That, until further notice, is Beijing’s grip on reality. But never mind – there’s always the Summer Fun Party – Cool Cool Circus!

12 Responses to Put yourself in Beijing’s shoes…