Up against a deranged Beijing

With the nomination period over, we can see the impact of Hong Kong’s system for keeping ‘pro-independence’ candidates off the ballot. Perversely, it boosts independence as a concept and slogan. Otherwise, the picture looks almost deliberately bewildering.

Some of these groupings and candidates were guided by principle, while others chose to try – even coordinated – different tactics. Without parsing 10 or so localist groups’ platforms, it is hard to say how consistent the government has been in applying the suddenly introduced rule. On the face of it, officials seem to have countered with a fairly fine definition of the forbidden political stance, but felt free to delve deep into candidates’ psyches or old Facebook entries to detect it. Edward Leung made all the right declarations, but was still barred from running for not being sincere.

You and I and his supporters all know he was, indeed, trolling the government and this Communist-style system designed to limit who we can vote for. The question now is whether supposedly impartial civil servants have the right to make such a decision and whether this whole set-up can possibly be legal. Perhaps the government is hoping that the courts will uphold at least some technicalities in these different cases. If not, we can be pretty sure that an ‘interpretation’ by Beijing of the Basic Law will swiftly Mainlandize Hong Kong’s legal system as necessary.

Edward Leung won over 15% of the vote in February’s by-election; it looks as if Beijing’s Liaison Office has specifically ordered that he be kept off the ballot at any cost and thus out of the Legislative Council. Let’s look at the broader context. The government is also censoring candidates’ election materials (this is also begging for legal action). According to the Financial Times, Western diplomats in Hong Kong are surprised to find that Chinese officials seem to seriously believe that foreign-backed hostile forces are using democratization and human rights to try to destabilize the city. A PR video by China’s security apparatus includes Hong Kong teen radical Joshua Wong in a warning to the nation against US-inspired apocalypse via splittists, dissidents and lawyers. Lawyers who 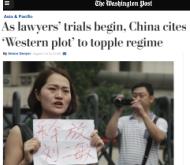 are of course currently being persecuted for plotting a Western-backed ‘colour revolution’ to overthrow the one-party state.

If it’s any help, Hong Kong is not alone in getting the current Anti-Splittist Anti-Counterrevolutionary Clampdown treatment – they’re doing it to everyone. It is tragic to see Hong Kong’s own institutions and bureaucrats being dragged into the Communist way of doing things. But we are dealing with a regime in Beijing that is genuinely paranoid – as in ‘delusional’, as in ‘mentally unhinged’. I suspect that some of our local officials rejecting ideologically incorrect candidates believe in all conscience that they are sparing Hong Kong from something worse.

8 Responses to Up against a deranged Beijing