Just when you thought the Hong Kong government couldn’t get any more dismal, it issues a press release saying Rah! Rah! Go Hong Kong Movies at Obscure Cinema Event in the US! It lists (or attempts to bask in the reflected glory of) local productions that will be featured at the New York Asian Film Festival – but one is missing. The festival’s schedule includes the omission: 10 Years.

Rather than ignore the low-budget dystopian anthology, Chinese official propaganda organs had a foot-stomping, mouth-frothing hissy fit about the portrayal of Hong Kong being crushed by Mainland/Communist despotism. Pro-Beijing shoe-shiners in Hong Kong’s entertainment industry followed suit when the movie won the Hong Kong Film Awards, whining bitterly that the top prize should go only to big-budget productions with special effects, gorgeous pouting starlets and no message.

The public and media (let alone taxpayers) can only conclude that Hong Kong government press releases cannot be treated as accurate and authoritative. So when an official notice reports that the water quality at Turtle Cove Beach is ‘fair’ today, we must assume that the bay may in fact be strewn with piles of E.coli, dead rats and used syringes. When it says the Museum of Coastal Defence Fun Day will include a ‘Fun and Joy Balloon Twisting activity’, parents must consider the very real possibility that the civil servants have knowingly organized an event that will be miserable and abounding in choking hazards. When the bureaucrats advise that the stool of a kid at a Shatin kindergarten tested positive for Coxsackievirus A6, we owe it to ourselves to wonder whether – or why – they are not telling us about 50 others fading fast as a result of bubonic plague, zika virus and necrotizing fasciitis.

The air-brushing of a movie title out of existence undermines whatever remains of the government’s credibility three-fold. First, of course, it is pathetic, ridiculous and laughably infantile. Second, it draws yet more attention to the offending work (no-one would have noticed if they had just listed it). But third – it makes it seem as if the film is coming true. 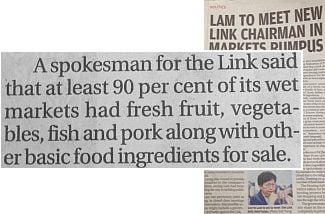 And what do the other 10 percent sell?