Doing his bit to ensure the world continues to get weirder by the day, uber-tycoon Li Ka-shing suggests higher taxes on business to address the wealth gap and, particularly, Hong Kong’s growing Stroppy Young People Problem. He even pulls a number out of the air: an extra one or two per cent.

It’s a silly idea. In the 2016-17 budget, profits tax accounts for HK$138bn, which is a bit over a quarter of government revenue. Pushing the 16.5% rate up a couple of notches would yield a bit more, but why bother when the government accumulates massive surpluses year after year (around HK$80bn last time)? The government doesn’t need more money.

The Bloomsburg report notes that, unlike Warren Buffett and Bill Gates, Li opposes higher taxes on wealthy individuals. His reasoning – “You mustn’t tax some people more and 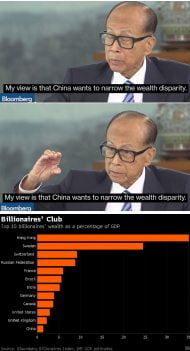 some people less or else it’s chaos” – is amusingly nonsensical. As a non-salaried chairman raking in billions in untaxed dividends, Li is in the fortunate position of not paying personal taxes. Hong Kong tycoons also differ from Buffett and Gates in that they see their wealth as a means to immortality, to be preserved and passed down through the generations of genius offspring.

We can forgive Li and his fellow plutocrats for drooling over their loot and refusing to share it with anyone else. They are only human, and probably perceive their American counterparts’ plans to give everything away as grotesque pretentiousness and vanity. What is harder to ignore is how they accumulated such vast riches in the first place, essentially by helping to create the wealth gap and social discord they now claim to worry about. One in seven Hongkongers live in poverty and young people lack opportunities because the city’s family-run cartels are allowed to suppress competition and overcharge the population for necessities. (I love the bit where the Bloomberg interviewer says: “but Mr Li – you’re the one who built 200 sq ft apartments and charged HK$4 million for them.”)*

Property moguls have done this unconvincing hand-wringing-and-weeping routine before when they sense that the mood is turning against them. Lee Shau-kee offered to donate land for cheap homes a while ago, and a few years earlier tycoons’ kids felt a need to launch contrived charitable foundations. Li’s comments look like a feeble attempt to appear to be a part of the solution.

After being co-opted by Beijing in the 80s as a loyal Hong Kong support base, our short-sighted local tycoons couldn’t resist gorging themselves. It is telling that the leadership that has finally noticed that these family conglomerates are parasites undermining Beijing’s grip on Hong Kong is the most vicious and insecure regime for decades. As with mass-murderer Mussolini and his trains running on time, Hong Kong people will look back at the despotic and tyrannical Xi Jinping and say, “but at least he shafted the tycoons.”

Meanwhile, the property barons and the Chinese government having both left it rather late to start caring deeply for the downtrodden dispossessed kids, our latest flamboyant, fantasizing, fun-loving freaks and fiends step forward and take a bow – the Alliance to Resume British Sovereignty Over Hong Kong and Independence (in that order, these guys being pragmatists about things like that). 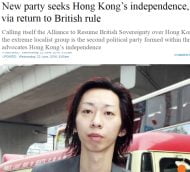 6 Responses to Trying to be popular, old man talks drivel