Beijing’s friends in a flap

As the Kidnapped Bookseller Saga continues, Hong Kong’s government demonstrates its resolve by announcing a no-nonsense pro-active decision to write a letter to the big boss in Beijing. Chief Executive CY Leung also wonders whether Mr Xi’s officials could or should do more to notify Hong Kong upon the abduction, blindfolding and confession-forcing of city residents. And he might send delegations up there. If necessary. By being open and honest about his administration’s powerlessness, CY actually retains a shred of credibility. 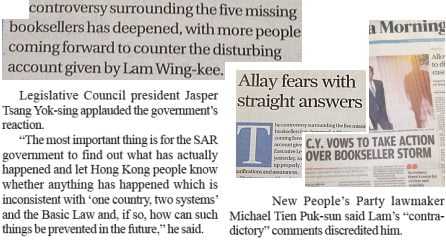 The government’s supporters and pro-Beijing forces are more exposed. Legislative Council president Tsang Yok-sing says we need to ‘find out what actually happened’. The South China Morning Post editorial agrees, citing uncertainty arising from the conflicting accounts of events. (This is how religious-nut creationists argue against teaching only science in science classes – demand that schools cover ‘both sides’ of the ‘controversy’.) The SCMP considerately reports more doubts in the form of returned bookseller Lam Wing-kee’s Giant Enormous Contradiction Inconsistencies Discrepancy (about whether colleague Lee Po said or intimated that he was abducted from Hong Kong). New People’s Party lawmaker Michael Tien says this discredits Lam.

Another approach is to split hairs. One government supporter has been heard complaining that CNN star newscaster Kristie Lu Stout made a slip-up during a broadcast yesterday, saying Lam had been ‘kidnapped’ when, being over the border, he was ‘arrested’. SCMP columnist Alex Lo ruminates on this important distinction. 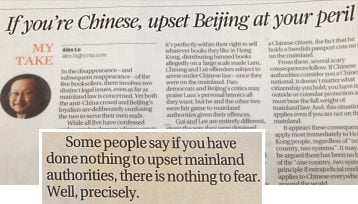 This leads to a resigned/cynical/cretinous ‘what did the rape victim expect, dressed like that?’ reaction to and explanation for all the fuss. If the regime in Beijing believes it has feudal-style ownership of Chinese people throughout the world, then you have only yourself to blame if you get dragged off for producing a gossipy book about the emperor.

As a last resort, you can always point at the evil hypocritical USA, which is Just As Bad, because it used abduction and extrajudicial transfer of people it thought were plotting terror attacks, which are the same as gossipy books if you think about it.

Oddly, a voice of sanity squeaks above the desperate pro-establishment attempts to excuse, downplay or muddy Beijing’s embarrassing attack on Hong Kong people’s freedom. The Standard (stablemate of Sing Tao, spreader of anti-Lam exclusives) wonders whether the smears won’t end up being counter-productive and boosting the opposition vote in the September Legislative Council elections. Well, precisely.

9 Responses to Beijing’s friends in a flap