In praise of lame propaganda

A Chinese company is buying Western photo archives, raising the theoretical possibility of such images as the Beijing ‘Tank Man’ being censored out of the world’s collective consciousness, as they have been in the Mainland. Chinese leader Xi Jinping further embellishes his personality cult with a high-profile inspection of the main state ‘news’ media, and demands their total loyalty to the Communist Party line. A Chinese ministry issues regulations that apparently ban any foreign entity from posting any content on-line in China without authorization – though no-one knows if this is bureaucratic empire-building or a genuine attempt to further filter out evil hostile alien influences.

In Hong Kong, the South China Morning Post counts down the days before Mainland tycoon (thus Beijing-connected) Jack Ma takes over from the patriotic Malaysian-Chinese Kuok clan. Unlike most newspapers across the globe, the SCMP is actually hiring, presumably to prepare for its transition from old-school tool of aging patrician shoe-shiner to high-tech generator of positive energy and soft power in loyal whizz-kid hands.

Media watchers ask: will the SCMP churn out more propaganda, or better (or more-but-better) propaganda? Beijing presumably expects something more sophisticated than today’s visibly clunky and sporadic Motherland-oriented obsequiousness and reader-repelling echoing of the Hong Kong government’s delusional press releases. But then again, in just the couple of months since the SCMP Alibaba deal was announced, Xi Jinping’s clampdown on information (among much else) has become plainly more totalitarian, extending as far as kidnapping Hong Kong book publishers. Maybe Jack Ma will have to turn the paper into a rabid Global Times-with-HK-characteristics in order to prove his devotion to the Party and its ‘core’ Xi. The Kuoks must be breathing a sigh of relief that they won’t have a newspaper keeping them awake at nights any more.

Either way, the new management will presumably want to address the purposelessness of the SCMP’s current low-quality groveling. Today’s City Beat column illustrates the problem.

Most readers will give in to the urge to skip yet another load of blather about the Mongkok Riot. Those who wade through the piece will find that it expresses some puzzlement that Beijing is not pushing Hong Kong to implement the long-shelved ‘Article 23’ national security legislation. It seems we should expect this after Mainland officials’ denunciation of local ‘separatists’ – a major CCP phobia lurking from Tibet to Xinjiang to Taiwan. The author says that this movement is restricted to a tiny group of extremists completely out of step with mainstream public opinion, so it would be better for Beijing to be nice to Hong Kong’s moderate majority.

The column does not come to any real conclusion. In fact, it argues against itself. The writer says pro-independence militants alienate themselves from the broad populace and could provoke action on Article 23. Yet she also implicitly accepts that action on Article 23 would unite extremists and mainstream in opposition. (The fact is that Article 23 is so symbolically charged that it is as untouchable as scrapping the currency peg.)

Which leaves us none the wiser. As an example of the sloppy thinking behind this column, consider this…

The central government’s alarm and worries over the “separatists” are understandable, although it could show more tolerance to those “localists” who are notorious for their hostility towards mainlanders but do not advocate Hong Kong’s self determination or independence. That could explain why it was willing to suspend further expansion of the scheme that allows residents of approved mainland cities to visit Hong Kong as individuals, rather than as part of tour groups.

No – Beijing’s decision not to flood Hong Kong with yet greater numbers of mainland shoppers was not a ‘reward’ for relatively moderate localists. It was common sense based on Hong Kong’s inability to accommodate more visitors or on fears of increasing anti-Mainland sentiment among the whole non-landlord population.

It is unlikely that this sort of sub-par propaganda will survive the new trendy space-age professional ownership, so enjoy it while it lasts.

These are some of the nicer comments… 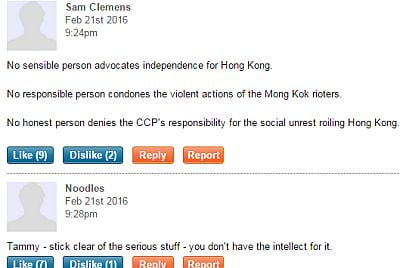 8 Responses to In praise of lame propaganda