Today’s Standard is dominated by pain and suffering in the form of Henry Cheng, boss of New World. He shoe-shines the government by whining about how the Fishball Riot has harmed business in Hong Kong (including his company’s chain of jewellery stores); he then begs for policy measures to help him sell more of his company’s overpriced apartments; the administration’s response is to kick him in the teeth by scrapping plans to gift his company rights to an expanded Tsimshatsui Waterfront Tourist Hub Theme Zone.

Maybe it’s not in that order. Maybe he begged for the property market boost first, then the government gave him the TST Waterfront kicking out of annoyance, after which he did the Fishball Riot-groveling thing to try to make amends.

The U-turn on the TST Waterfront deal looks and feels like the government listened to public complaints about collusion. Since, obviously, the government would do no such thing under any circumstances, there must be some other reason for the decision. Threats of legal action from other, jealous property interests presumably played a role. Each member of the real-estate cartel has an overweening sense of entitlement to its own ‘fair’ slice of the pie, but they get seriously miffed if one gets an extra freebie. Remember the moaning from the other tycoons when Li Ka-shing’s son Richard got the Cyberport boondoggle on a plate back in 98-99?

On the subject of overweening senses of entitlement, read Henry Cheng’s logic in asking the government to loosen measures designed to cool the property market…

The fantasy that prices cannot fall below (current) production costs is widespread among Hong Kong property interests. So distorted and rigged is the local housing market that basic economics do not seem to apply – until eventually they must (compare with oil, where Sinopec is finding it cheaper to shut down oilfields). It was only a few years ago that HK$3,000 a square foot was considered normal for basic apartments in Hong Kong; now the developers are 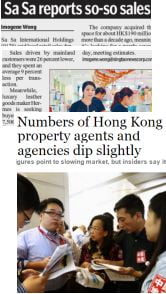 wetting themselves at the prospect of the price dropping below HK$10,000. You can have all the bubbles and speculation you want, but ultimately, it’s a concrete box worth no more than an end-user is willing to pay for it.

I love that bit about “…how can we ask developers to suffer a loss…?” It gave me a really nice warm feeling inside.

The good news keeps coming. Underwhelming Headline of the Day Award goes to the South China Morning Post, which announces that the number of sweaty loser slimebag real-estate agents has dropped by a tiny, barely perceptible and statistically insignificant amount. But, as the joke goes about what to call 20 lawyers at the bottom of the harbour, it’s a start. I recently saw agents who would normally be infesting IFC Mall roaming up the Mid-Levels Escalator as far as the Graham Street market in search of idiots who might buy. Like the wild boars straying down from the woods into Admiralty, it is a sign of over-population and terrible damage to the ecosystem, we hope.

Much as we would love to think that the one-night Mongkok Fishball Riot Mayhem damaged the Cheng family’s Chow Tai Fook chain, it obviously did not. But the bling shops’ sales fell an encouragingly painful 28% this Chinese New Year. Hong Kong people will also be delighted to learn that the stuff-women-smear-on-faces outlets are similarly suffering, with Sa Sa’s sales down a fifth. This is divine retribution for over-expansion driven by lust for easy profits from anticipated never-ending flows of Mainland Chinese buyers of glitzy tat.  We are reassured to hear that the opening of Shanghai Disneyland will further reduce the scale of the Mainland Tourist menace. (The SCMP helpfully advises readers that the visitors are less likely to come here if we are beastly to them.) I am not convinced that a serious Renminbi devaluation is imminent, but – oh, the joy, if it happens, and shopping trips to Hong Kong become uneconomic.

As for poor Henry, we can only recall the words of a great Frenchman: life would be unbearable were not for the misery of our friends.