Zombie psychopaths the only explanation

Even the Standard’s Chinese Idiom of the Day sends a not-so subliminal message – warning that radical nihilists threaten to ‘burn the jade along with the rocks’. (The column, written weeks ahead, alludes to pro-democracy lawmakers’ filibustering, but some Confucian wisdom specific to Hong Kong Indigenous will no doubt follow.) Everywhere you look, you see the official line: there is no connection whatsoever between the Fishball Riot/Revolution/Mayhem in Mongkok last week and anything happening in real life….

The violence on the streets took place in total isolation from the city’s poor governance, socio-economic problems and gradual suffocation by the Chinese Communist Party.

…just relied on the public abhorrence of violence to whitewash their own responsibility for the deterioration in relations between the public and the police.

Chief Secretary Carrie Lam said whatever the causes of the incident, be they a breakdown of trust in the administration [of chief executive Leung Chun-ying], problems with the management of food vendors, or a backlash from the Umbrella Movement, all of these are still “excuses.”

What she meant by this was that we must concentrate on the perpetrators of violence and on bringing them to justice, because these explanations couldn’t possibly be what motivated the “mob.”

But if we don’t agree with their behavior, and we accept that none of these reasons account for it, then it can only be explained by a sort of irrational recklessness, or even a hysterical impulse to violence.

Or, of course, it’s the evil/hostile/foreign forces that ultimately lie behind every mishap that befalls the Chinese regime (note that the above quote comes courtesy of the US-funded Radio Free Asia).

Otherwise, the Hong Kong government is reduced to pitifully pleading with the media not to term the events the ‘Fishball Revolution’ – a request every hip outlet in the world will obviously fail to hear. The imagery of downtrodden vendors of street food nobly rising up is all too Storming-of-Bastille, Let-them-eat-siu-mai for comfort. (The hapless government is correct when it whines that the phrase is not strictly accurate in terms of what happened in Mongkok. But those who live by mendacity and spin, die by it.)

Have you ever seen a Hong Kong pro-establishment righteous-Westerner meme go viral, as if it were a clip of a reporter being dragged off a bus and beaten up by cops? You have now. This Facebook message (a copy is at this patriotic blog) is doing the rounds on pro-Beijing email address lists. There’s nothing exceptional about it; the writer expresses at length the standard viewpoint of many people exposed to/co-opted by the Mainland/bureaucracy/tycoon system. What is telling is the way loyalists are so impressed and grateful that a non-Chinese says such things that they have to email it to each other in wonder.

Elsewhere, the line that zombie psychos are solely to blame fails to get through. Worryingly for the administration, even the police are showing signs of anger at their own leadership. And the sort-of-separatist militants of the Heung Yee Kuk, traditionally pets of Beijing, are choosing an ideal time to stir up trouble by re-thinking cooperation with local officials. Though maybe there is some hope. Seen yesterday, St Valentine’s Day, I asked why a couple would want their wedding photos taken with the HK Government Lubyanka-Palace as a backdrop. The reply I got was… 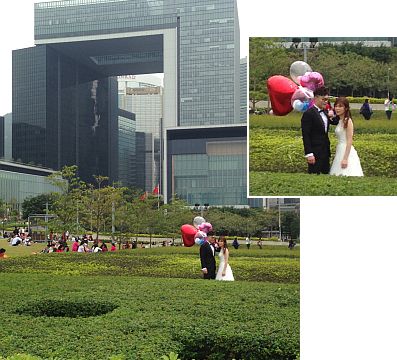 15 Responses to Zombie psychopaths the only explanation