The two newspapers have certain similarities. For what it’s worth, both are owned by aging Malaysian resources moguls. More relevantly, both continue to have – by the sorry standards of Hong Kong’s tycoon-owned shoe-shining media – a reputation for at least some journalistic integrity. And perhaps most important, both have existing international reach, with the potential in theory to become more global (SCMP on Planet Anglo and Ming Pao among Overseas Chinese).

Alibaba denies it. If it were true, Jack Ma could only be acting on official guidance. And it would confirm that Beijing is dropping any pretense at subtlety and openly, systematically increasing its grip on what it sees as key parts of Hong Kong media. Given what we know of Xi Jinping’s overall centralizing impulse at home and abroad, it would probably be surprising if this weren’t happening.

Much of the chatter on all this in Hong Kong concerns press freedom in the city (one cheery point of view is that newspapers are dying anyway so it doesn’t matter). Elsewhere, the angle is more about how any apparent deterioration of press freedom in Alibaba-owned Hong Kong-based media will damage the reputation of Jack Ma and company.

Either way, the SCMP (or Ming Pao) will be under greater scrutiny than ever for signs of bias. For example, we wouldn’t normally remark upon today’s SCMP front page for its averagely depressing choice of lead stories (pap over-hyped to Beijing officials’ unsubtle tastes) but now all of a sudden we do… 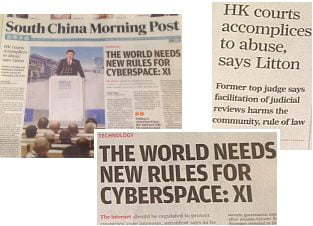 The top story is ‘Dictator whose regime now controls this paper wants to censor everything everywhere’. (This is the print edition; the online version buries Xi’s World Internet Conference comments where they belong. Scrutinizers will have fun comparing print and online editions as Alibaba removes the paywall.) The other main story is a repeat of ex-judge Henry Litton’s (subsequently disputed) bad-mouthing two weeks ago of the supposed evils of judicial reviews. What no-one mentions here is that, while it may be open to abuse, this method of checking government power is arguably of unique importance in Hong Kong, where we lack democracy but nonetheless have rule of law.

And now every day becomes What’s On the Front Page Day?