The woman in front of me at the ATM pulled her card out, and then, before I had time to gently nudge her aside – put another one in. An attack of Irritable Gwailo Syndrome started to come on, but she was saved when an offer of a 19.76% annual interest rate caught my eye. Such a massive return is obviously absurd. Even ‘wealth management’ shadow-banking pyramid schemes in the Mainland would blush to advertise such a rate. The extremely precise figure, down to a technical-sounding 76 basis points, gives it a slight veneer of credibility. But the small print contains all the usual disclaimers, making it clear this is not fit for human consumption… 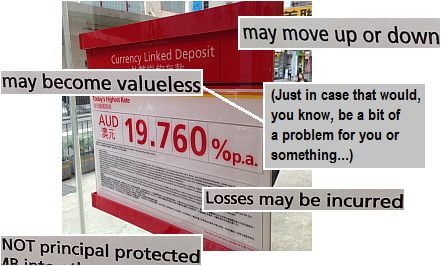 Only in Hong Kong – I expect – would retail banks in residential neighbourhoods distribute this sort of (whatever) derivative product. And even here, these days, the ‘investor’ would have to sign dozens of forms and be tape-recorded.

This morning, I find myself reading much the same pro-forma warnings – ‘you would be insane to even think about it’ – on the risks involved with another investment. This time it is RMB-denominated two-year Chinese sovereign bonds. Since the Chinese government, whatever its other failings, is probably not going to default, you would have thought these things should be reasonably safe. However, the small print specifies that ‘losses are as likely as profit’… 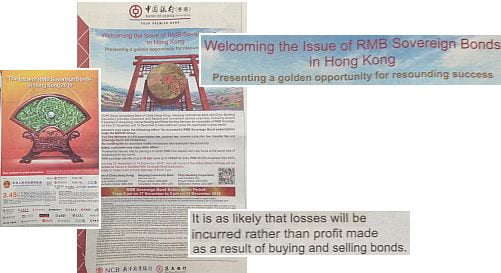 ‘As likely’. If true (the wording crops up in lots of prospectuses) it would mean that a portfolio of such instruments would, on average, give you exactly the same returns as money stuffed in your mattress – so what’s the point? If not true, why put the disclaimer there?

The Bank of China HK ads for the bonds in today’s mass-circulation papers plug lame special offers like a microscopic discount on the HK$-RMB exchange rate, and possibly free Hello Kitty dolls. The visuals are Forbidden City/drum/jade, suggesting traditional virtues like integrity and virtue and repaying debts, rather than symbols of the great high-tech China Dream future. It is targeting ordinary and probably conservative retail investors.

While they might be attracted by the 3.45% annual return, they will be running a significant foreign exchange risk (which the announcements hint at). Many China-watchers see the Yuan as overvalued (whatever Donald Trump thinks) and ripe to fall 20% or more in the next couple of years. That would be around a 13% drop in the HK$ value of the bonds after the interest.

But on the other hand, you get to join in the Hong Kong government’s warm and euphoric glow of gratitude towards the Central Government for its clear support in developing Hong Kong as an offshore RMB business centre. I declare the weekend open with the thought that with such a satisfying reward, second only to the frisson we feel at the mention of ‘Belt and Road’, who needs mere money?