Will the classified ads be full of fake handbags?

Going by the rumours and cagey official statements, we can assume that Alibaba boss Jack Ma is going to buy the South China Morning Post. The question is why. 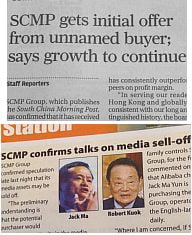 One possibility is the Mainland fondness for imitation. Having copied the Amazon business model, he now wants to follow Jeff Bezos in owning a newspaper – and will presumably later launch his own rocket. Another theory is that the SCMP will fit in with his other media interests, even though they are Mainland, Chinese-language, web-based ‘platform’-type things that arguably do not complement a Hong Kong news outlet.

A third explanation is that he has basically been told to buy it. The current owners would obviously love to get rid of the paper: as an investment it has plummeted in value, while reconciling journalism with the pre-emptive shoe-shining of Beijing has been a nightmare. They can/will sell it only to someone approved by the Chinese government, which is now openly tightening its grip on Hong Kong.

Here’s a clue: the Communist Party has a knife pointed at the heart of his multi-billion Amazon/PayPal/Ebay-with-Chinese-characteristics concession. Jack Ma may well be a genius at reinventing and adapting American e-commerce concepts – and certainly at getting the Chinese consumer to embrace the once-alien idea of payment to/purchases from unseen strangers. But Alibaba’s success inevitably relies on Chinese corporatist state protection and Communist Party patronage. Beijing minimizes foreign or domestic competition and prods the banks into cooperating with the virtual payments process, and presumably the princeling kleptocracy takes a slice of the action along the way.

The Financial Times recalls Jack Ma’s record as an obedient servant of the party-state who will help jail journalists. He is no doubt a nice, decent, charitable ‘self-made’ guy – but this is China and either you do what the Communist Party says, or you do/have/are nothing.

Road’ blather du jour, by the way). Today’s reports local officials’ statement that the Hong Kong-Zhuhai Bridge might be delayed a year until 2017, because it is ‘huge and complicated’ and involves ‘technical challenges’. The story also says the link will cut travel time to the less-than-compelling destination of Zhuhai from three hours to 30 minutes, which is wrong – it’s currently a 70-minute ferry ride, and negotiating the bridge’s vast customs/immigration complex looks set to take half an hour.

If it stays still, that is. Some investigative work from (ex-SCMP) Howard Winn tells a different story. The monstrous white-elephant could be five years behind schedule, as engineers try to build the aforementioned border-crossing facilities on ‘toothpaste mud’. And even if that turns out to be too pessimistic, the tunnel sections at the other end of the link look just as screwed. The funny part, if you find billions of your tax dollars oozing out all over the seabed amusing, is that no-one’ll use the bridge anyway, so 2016, 2017, 2021 – who will notice or care?

16 Responses to Will the classified ads be full of fake handbags?