Of course, it can always ditch unpopular policies…

Best excuse for dilatoriness so far this month: found myself caught up in a labyrinth yesterday…

It’s actually a Lutheran labyrinth, which surely has the makings of a good tongue-twister. I was inadvertently passing by a Christian missionary complex near Shatin. The Norwegian founders incorporated some unsubtle Japanese/Zen- as well as Chinese-type décor into the place, seemingly to make their faith look as comprehensively Asian and non-Western as possible, albeit through Scandinavian eyes. 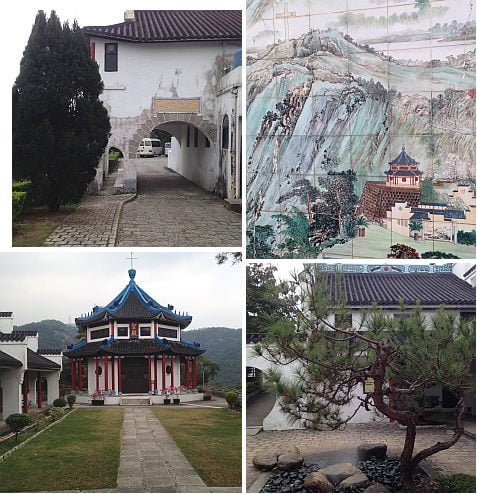 Great location for a low-budget kung-fu movie, if the church ever wants to get into some Buddhist-style monetization. Otherwise, it scores four stars for ‘serene-contemplative’. The small handful of people drifting silently around in ones and twos appeared to be slightly scary misfits, but maybe that’s what they thought about me.

Back in the real world, and the big story today is the great MTR bailout thing, which supposedly solves, once and for all, the cost overruns on the HK-Guangzhou high-speed rail HK$85bn white elephant.

Forget its legal status and public listing – the MTR is simply a part of the public sector. The idea that it and the government are in conflict and that ‘arbitration’ or financial transfers can meaningfully take place between them is a trick. Whoever seems to pay, it’s your wealth, and you’re being ripped off by this bureaucrat/engineer-construction-developer nexus, again.

The government statement hints at desperation. We are invited to give a damn about the impact on the West Kowloon Cultural Zone-Hub, and – even more enticingly – we are told that terminating the high-speed rail project would be an unthinkable catastrophe. Mmmmm… I smell fear.

This might not seem to have much to do with the fuss over primary school assessment tests – but not so fast. At a Legislative Council hearing yesterday, parents and kids spoke against the unpopular and badly-implemented system. One child who improbably claimed she supported the tests was revealed as the daughter of a pro-government politician, who had scripted her remarks. We can safely say that the politician, as part of the Chinese Communist Party’s local front, was following orders. Thousands of parents organizing against the assessment system have taken note, and declare that they will not forget his affiliation when LegCo elections take place next September. Watch the government hastily make some concessions on the tests.

The government will need LegCo to approve the MTR high-speed rail bailout. With an inbuilt loyalist majority (including representatives of construction and other parasite interests), that should be no problem. But the pro-government parties will then have to face voters in the elections next September. And today’s younger, post-Occupy opposition – less fixated on electoral reform and more gifted at stirring up trouble – will be sure to remind voters who supported what in LegCo.

The government needs loyalists’ support for many unpopular policies. To the extent the pro-Beijing camp delivers, it risks a backlash at the September polls. A real labyrinth.

6 Responses to Of course, it can always ditch unpopular policies…