I don’t usually pay attention to men in shorts running up and down fields. But the event at Mong Kok Stadium last night was different. In theory, it was a pre-pre-pre-qualifying-round World Cup game between two sides with no hope of getting to the big international tournament. In practice, it was another opportunity for the (especially younger) freedom-loving Hong Kong people to defy the creeping totalitarian control China’s Communist regime seems intent on imposing on their city.

That sounds like an absurdly grandiose way to describe fans watching a bunch of guys kicking a soccer ball around, but this is what happens during decidedly weird times.

To my untutored, non-sporting eye, the group of teams in this round was tailor-made to maximize China’s chances (Team Motherland was up against Qatar, Hong Kong, the Maldives and Bhutan – a smaller combined population than Shanghai). And no-one

seriously imagines that you could put FIFA and PRC in a room together without some bribing-and-fixing taking place. By all accounts, Xi Jinping’s ‘China Dream’ includes fantasies of World Cup glory. China is supposed to win.

In Hong Kong, the context – we hardly need remind ourselves – is the pre- and post-Umbrella Movement malevolence unleashed by Beijing’s United Front in 2014-15: broken promises on democracy, smears, intimidation, abuse of power. And the ongoing backlash: anti-smuggler protests, anti-MTR protests, localism, cynicism, hostility to Hong Kong and Mainland authorities.

In earlier games, Hong Kong fans had jeered the Chinese (thus also Hong Kong’s) national anthem. No-one in polite society – government, media or sports governing bodies – could acknowledge this for what it was: a highly public and unambiguous symbolic rejection of the Communist regime’s sovereignty over this city. They could only splutter angrily about rudeness and insults. FIFA (a sports bureaucracy that lusts after Mainland royalties and kickbacks) levied a fine on the local football governing body. The Hong Kong government went into full freak-out mode, deeming local soccer fans to be a subversive enemy force no less than, and indeed part of, the Umbrella/pan-dem/pro-independence/Johannes Chan/CIA coalition of evil. And rightly so.

As part of the big clampdown on the Great Booing Soccer Fan Threat, the government got last night’s game switched to the smallest venue it could use, angering old folks and others who couldn’t get tickets. It also planned a vast police presence in the area and reiterated warnings about bag-searches and booing. It is a classic CY Leung tactic: persuading people by massively and gratuitously pissing them off in every way you can devise. Thousands watched the action in a spirit of festive, communal solidarity on outdoor TVs.

There were boos (plus a moment of silence for Paris). Scurrilous wit being an invaluable weapon in this asymmetric clash of cultures and values, the local supporters at the stadium carried banners with the word ‘BOO’. They shouted in Cantonese and English, while (segregated) Mainland fans used Mandarin. The home crowd carried banners saying ‘HK is not China’ and ‘Fight for HK’, which say one thing if ‘HK’ means a sports team, another if it means a place, community or people. CY Leung refrained from expressing support specifically for the Hong Kong team in this match against the sovereign nation. To add to the ingredients, it is a multiracial line-up, hard to envisage in a ‘China’ team.

Obviously, many spectators were eagerly following the game as a sport, in which goal crossbars apparently played a crucial role. But it is hard to ignore the overriding political symbolism. Afterwards, the Hong Kong players bowed to their delighted fans. But Hong Kong had not won. Depending on your political stance, the cup is half-empty or half-full…

For freedom-loving Hongkongers, the main outcome of the 0-0 result is that China’s hopes are dashed – it is almost certainly out of the World Cup. Courtesy of your adoring Hong Kong Special Administrative Region, which you are currently trying to trash. It was a pleasure.

I used the phrase ‘decidedly weird times’ above. Try this… The widespread assumption is that last night’s game was switched from the 40,000-seat HK Stadium to the 6,700-seat Mong Kok one to – as the South China Morning Post put it – avoid offending the motherland. A subsequent SCMP report apologized and said the authorities weren’t making it up, and the field was genuinely unfit to play on. Only in Hong Kong circa 2015 will you read an update about playing-field turf and instantly assume that an editor enforcing the Communist Party line has ordered it to appear. 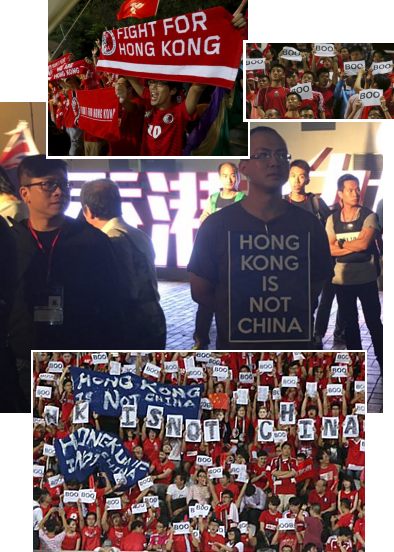