Not one, but two skewering opportunities

Although Hong Kong is not alone in giving Uber a rocky ride, it’s not doing much for the city’s tech-friendly, up-to-speed, ‘freest economy’, start-up-hub-zone-incubator reputation to be

putting the company’s office staff in cuffs and, reportedly, demanding HK$200,000 bail. Nor is it helping the HK Police’s local image as clumsy and heavy-handed when faced with anything vaguely young, hip and trendy, and selective in enforcement (compare with inaction against daily taxi-driver infringements and private cars’ illegal parking).

There is a genuine regulatory issue to do with licensing and insurance. There is also a large civil service with the administrative skills and powers to overcome such problems. The fact that the government is treating Uber as some sort of threat suggests that facilitating economic activities to serve consumers’ interests is not its priority here. What is?

Officials are supposedly fearful of taxi drivers, who in theory have the ability to bring Hong Kong to a halt and possibly trigger unrest. It has happened before, a long time ago. Even if the idea of ‘taxi riots’ is far-fetched these days, you can understand our valiant leaders being nervous about some sort of Cabbies-go-Umbrella road blocks.

The taxi industry is also an influential part of the Transport functional constituency, which like most trade-based functional constituencies is part of a legislative voting bloc that can be controlled by Beijing. Traditionally, the Transport constituency has thrown its weight around; when Miriam Lau was its representative, it fought against things like cleaner vehicle engines and tougher penalties for running red lights. It is a policy of the national as well as local government to place such a group’s interests above those of the wider Hong Kong populace (in case you hadn’t noticed).

Last, several thousand speculators are sitting on taxi licences, which are tradable and fetch HK$7 million or something – quite a lot for a bit of paper. As with a mortgage for a property, you can get a loan to buy one and then rent it out to drivers, thus achieving the Hong Kong dream of doing no productive work while raking in quick quick easy sure fast money and watching your asset rise up up up in value for all eternity. Faced with a choice between protecting the interests of such (if rather low-bred) investors and looking after the well-being of the public, officials will instinctively favour the former. (Same as with landlords: both have invested in something on the assumption that the government will keep it artificially scarce).

But, after all the blather about innovation and tech, the administration is exposing itself to a good skewering here.

On a similar note, Demonstration of the Week Award must go to the small but brilliant group who occupied part of Fanling golf course, calling for the land to be used for homes. 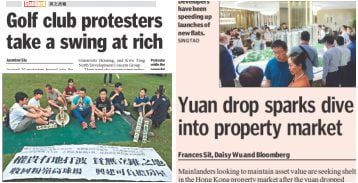 The HK Golf Club knows that it, too, is exposed to a massive skewering on this. Earlier this year, it produced glossy brochures on its Fanling estate’s historical importance, plus waffle about its ‘nature trails’, and a backgrounder with stomach-churning puke about how it helps the disabled and indigenous villagers…

Could ‘Occupy Golf Club’ become as popular as the anti-shopper gatherings in Sheung Shui have been? It would be a nice day out. Great picnic spot! (The Standard also reports that a weaker Yuan is attracting more Mainlanders to buy property here. That’s what a strong Yuan did, too. Most strange.)

To put housing issues in perspective, there’s Tianjin, where even Xinhua admits 112 are dead and 95 missing from the explosion. The visuals – still shocking after four days – and stories about cyanide make you wonder… How long it will be before a big area (a mile across?) of urban residential/commercial space can be made fit for human habitation again? Six months? One year? Several years? Assuming you can convince people to live and work there.

The weekend in pictures… 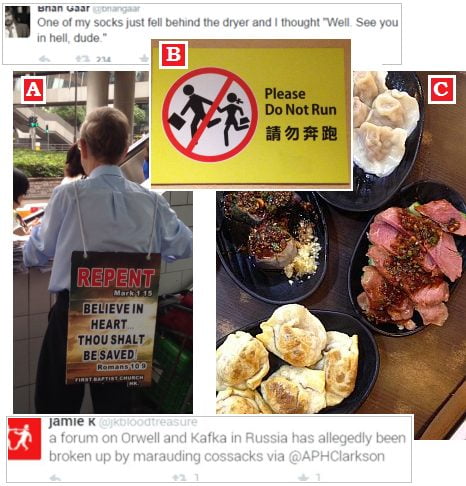 A  Trying to drown out nearby didgeridoo player (not shown), really loud street preacher screaming at passengers going up escalator (all too slowly) in Central.

B  ‘Every child an obese child – Discovery Bay’s aim’.

13 Responses to Not one, but two skewering opportunities