What’s missing from the HKU story

…but otherwise goes full-on against the students and other malcontents who are making trouble over the University of Hong Kong Council’s tortuous mega-fuss over the appointment of Johannes Chan as Pro-Vice Chancellor.

It seems to be a bit of uphill struggle. A profile of council chairman Leong Che-hung highlights sympathizers’ praise for his neutrality. Supporters of freedom and democracy might feel that the tendency of Hong Kong’s moderate establishment elders to sit on the fence is part of the problem (though it’s logically inevitable – come off the fence, and you either publicly sell the rest of your soul to the Communists, or you depart the

establishment). But to pro-Beijing eyes, Leong is being irritating and unreliable, wringing his hands over ‘uncivil activity’ when he should be blasting student protestors as blood-crazed criminals.

Another council member, Professor Lo Chung-mau, laments ‘a lot of outside forces’ trying to interfere in the body’s decision-making and goes on about violence making Hong Kong more like the Mainland. In a way, this echoes comments by Chinese Communist Party-backed newspapers’ audacious, or maybe clueless, description of the HKU student protesters as Cultural Revolution-style Red Guards. But the phrase about outside forces is ambiguous. Like Leong, he comes across as out of his depth; it’s one thing to be tamely pro-establishment, another to be dragged into Beijing officials’ United Front vendetta against Occupy when you’d rather be doing organ transplants. Little wonder several other members have fled the council under the pressure.

The SCMP has to turn to opinion pieces to guarantee full political correctness. Lawrence Lau bemoans ‘mob rule’ and ‘spoilt brats’ who have no respects for others’ rights, herald a generation ‘with no sense of propriety and shame’ and threaten rule of law. Alice Wu, for light relief, swoons in shock that callous commentators accused the aforementioned Professor Lo of deliberately falling to the ground during the University Council Invasion Mayhem Massacre last week.

So the SCMP has a couple of factual reports on individuals timidly blaming a variety of unnamed forces for vague unpleasantness, and a couple of opinion columns accusing one side of every bestial wrongdoing. What’s missing? Any word on what the students and their supporters think, and thus any direct mention of the underlying cause of this tumult: the Chinese government’s interference, via various proxies, in a Hong Kong university’s internal personnel issue. The one-country-two-systems deal under pre-1997 Sino-British agreements and today’s Basic Law specifically say this won’t happen. Yet here it is – so Beijing can punish an individual for his beliefs, in order to bully and intimidate others into silence and obedience.

(It could be that the likes of Lawrence Lau would justify their stance – portraying the students rather than Beijing as the instigators of ‘coercion’ – by saying that local protest and resistance are the root problem. If Beijing intends to crush Hong Kong, it is because it sees the city as a threat to the Communist Party. If the activists and dissidents shut up and learned to go along with the Love-the-Motherland stuff, the Red Inquisition would go away and leave us alone. But they don’t even hint at such a subtle angle, which we could dub the ‘Crush Yourself’ strategy. So we must take them at face value as shoe-shiners on the make.)

Indeed, few if any public figures want to openly suggest that events at HKU might be part of a broad United Front rectification campaign directed by the Liaison Office or even Beijing and aimed at strengthening the Communist regime’s control of the whole city. Alan Leong of the Civic Party does a lawyerly dissection of the issue at HKFP (Leong Che-hung originally invited Johannes Chan for the job, he says). But even he doesn’t quite join all the dots: he starts with Chief Executive CY Leung and ends with concern over repercussions for local universities. The SCMP may seem to be slanting coverage of the story by omitting one whole side of it. But it’s probably truer to say they and almost everyone else, zeroing in on Pro-Vice Chancellors and the professor with a walking stick, are deliberately or inadvertently missing what’s actually happening.

Not much coverage of the bizarre gathering at Chater Garden in Central on Saturday. Normally, people fuss about the number of protesters. This time, the big deal was the number of cops. Hundreds (definitely a three-digit number) of officers ringed a pathetically small group of pro-Beijing types at a ‘Support the Police’ event featuring the rabid Leticia Lee.

A group of localists and similar activists stood nearby, while the rest of the park was filled with laid-back, mainly young folk enjoying the sun and hurling occasional insults at the venomous Leticia.

They boys in blue looked suitably embarrassed, manning the sort of perimeter the Pope gets in Mexico for such a sad little assembly. Why such a vast number of cops? What on earth were they expecting? Perhaps they over-estimated the number of people who would turn up at a celebration of their own wonderfulness. Proof they are only human. 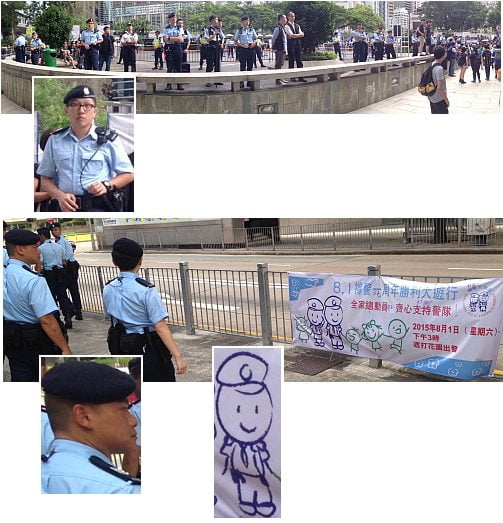 11 Responses to What’s missing from the HKU story