Guangzhou high-speed rail link and convert the station into a mall. The idea comes from uppity know-it-all think-tank Professional Commons; they have actually costed it and determined that using the giant space for retail and other activities would bring a significantly higher return. Needless to say, such economically literate common sense would entail a massive loss of face for the bureaucrats who so desperately pushed the white-elephant project a few years back.

Still, we have not heard the last about the Express Rail Link, to give it its proper name. It was originally supposed to cost HK$65 billion, then went to HK$71 billion, and will now cost HK$85 billion. The big debate is whether the government or MTR should pay the overrun – as if either way it doesn’t ultimately come out of our pockets.

A Standard columnist asks how such an overrun can happen, and mentions that another project – Liangtang border crossing – is also massively over-budget. “Are there systemic reasons why the government keeps underestimating…?” We could also mention the Bridge to Nowhere/Zhuhai.

It looks like a scam. But I think it’s actually a double-scam.

The first scam is obvious. The Hong Kong people toil and create wealth, much of which is then sequestered via land premiums and other hidden taxes and stuffed into a Capital Works Stash. Bureaucrats and construction interests devise and build pointless huge projects to recycle your hard-earned money into their own pockets.

But they also gear this scam up. Obviously there is limited capacity in terms of equipment, materials and labour (especially as much of this industry is cartelized and controlled by the same tycoons who corner the rest of the domestic economy). So simultaneous big projects inevitably push each other’s costs up. This is accompanied by much hand-wringing and moaning and lamentation, as if the cost overruns are some sort of unforeseen natural disaster or act of God. The usual scumbags can come back and rip us off a second time. 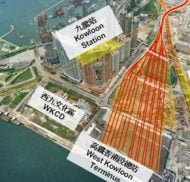 elephants could solve a lot of problems. The vast palatial hole under West Kowloon could rehouse a load of crappy above-ground malls, which could then be turned into things people need but can’t have because We Have a Shortage of Land. (Proper food courts!) A glance at the map on my wall suggests that Disneyland is comparable in size to a big chunk of Shatin and, if repurposed into a car-free high-density Discovery Bay, could house 250,000 people with no problem (Shatin has 600,000). The wretched HK$7 billion cruise terminal at Kai Tak is a cavernous and empty structure that could hold every elderly care home, kindergarten, artist’s studio and columbarium niche we could ever need. The Zhuhai Bridge… a skateboard course?

This just in: Stuart Wolfendale. For the old folks, a bit of nostalgia. Hard to believe today, but the South China Morning Post used to have this – a humour column. Really.