Just a few days ago, Hong Kong’s pro-establishment lawmakers made stupendous asses of themselves by neglecting to vote on the crucial political reform package. Their farcical exit from the Legislative Council chamber highlighted the unthinking and robotic behaviour

that the Chinese Communist Party expects and requires of its allies (and the problem with unquestioning obedience). It also raised doubts about some of these individuals’ basic IQ levels. And for good measure, it reminded observers that the pro-Beijing camp is simply an ad-hoc and largely incompatible mish-mash of devout believers, co-opted special interests and blatant opportunists, with little in common but obsessive-compulsive shoe-shine disorder. One of the humiliated zombie-walkout losers-of-face is publicly blasting his fellow legislator and brother for not joining in last Thursday’s March of the Loyalist Lemmings.

And so it is only to be expected that the big story this week is… the earth-shattering and fatal mega-split in the pan-democrats, otherwise known as the departure of Ronny Tong from the Civic Party.

Ronny’s unsurprising and probably inconsequential decision reflects the pan-dems’ own dilemmas and inner crises. There is the perpetual Moroseness-at-all-Costs that requires the pro-democrats to be depressed and depressing, even when last week’s events hand them reasons to be cheerful and confident. This is important: a community looking for leadership doesn’t need woeful wrist-slashing martyrs. Related to this is the generational gap, as stodgy old lawyers and journalists obsessed with constitutional structures give way to the freedom-loving Hong Kong-first youngsters of the Umbrella era. And ultimately, there’s the deep question of how you convince a totalitarian, Leninist one-party state to let a pluralistic society live. Does it take defiance and opposition, or is moderation and compromise the only way?

As well as quitting the Civic Party, Ronny is standing down as a legislator. This will trigger a by-election. If the pan-dems manage to lose his seat in New Territories East, they will lose their narrow majority in the geographical constituencies, and thus much of the obstructive power they currently hold in the legislature – notably use of the filibuster.

This should be a hypothetical and improbable outcome. It will be a straightforward first-past-the-post race rather than the usual multi-seat, party-list proportional-representation bizarreness we usually get in Legco elections. The pro-dems will have to put a great deal of effort into losing – but as we all know, this is the sort of challenge they can’t resist.

It could be a blessing in disguise if the pro-dems did lose their power to filibuster. Nothing pleases the pro-Beijing media more than the chance to portray the pan-democrats as nihilistic troublemakers, a charge that resonates with much of the public. It would encourage them to seek different methods and indeed different goals. After 30 years, the fight for democracy in Hong Kong has achieved little or nothing, while the cronyism, the poor governance, the rip-offs and the inequality get worse, and people get angrier.

If there is a split, the pro-dems are dividing between those who have run out of ideas and energy, and those who have other things to do. What other things? Those who can’t answer that question should follow Ronny’s example and step aside.

Meanwhile, the real entertainment continues over in the pro-Beijing camp, where zombie-buffoons weep and wail and turn on their own siblings in their desperation to appease and assure their Communist Party string-pullers. 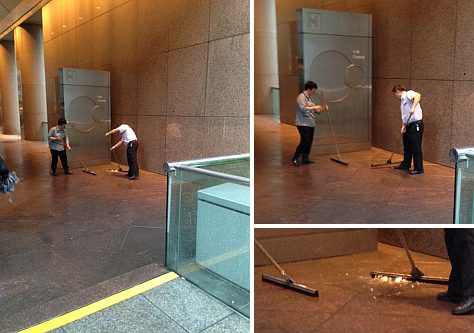