The South China Morning Post reports that Beijing is justifying its island-creation in the South China Sea on the grounds that it will improve weather forecasting. It also files the story under the tag ‘Diplomacy’, since ‘Pathetic lies’ wouldn’t fit. Meanwhile, the Hong Kong pro-government legislators who accidentally walked out of the most important vote of our time continue to weep vigorously in public to atone for their unforgivable sin against the Communist Party. What these two items have in common – aside from the obvious totalitarian Leninist context – is that they are both about people making a ludicrous excuse along the lines of ‘the dog ate my homework’.

Over in the private sector, the profit motive rules, and they know how to tell blatant falsehoods convincingly and with panache. The reason, of course, is competition.

For decades, Hong Kong’s market in packaged foodstuffs was a duopoly comprising the Park N Shop and Wellcome supermarket chains. They each claimed (and continue to claim) to offer consumers more, better and cheaper than the other, while in fact carrying near-identical product ranges at suspiciously identical prices. With no real competition, they had no serious incentive to lie well – as their unoriginal marketing and advertising shows.

However, in recent years new and adventurous retailers have identified gaps in this rigged and restricted market. Perhaps the first was Prizemart, whose cheap and amazingly cluttered stores offer known and unknown brands at very low prices, which could only have been sourced from different, and probably distant, distributors from those serving the Park N Shop/Wellcome monopsony.

The big success story in this sector is 759, a paradise of Slovakian canned stew, ultra-cheap French beer, wondrous Japanese wasabi-seaweed snacks and undiscovered species of Korean noodles. The chain has become so mainstream and ubiquitous that it has a branch at the airport and is expanding into cosmetics, cafes and toys. Some freethinking counterculture consumers accuse it of becoming a sort of neo-Park N Shop – though that seems a tad unfair, at least until they start offering 759-brand micro-apartments.

One newcomer is Foodwise, which specializes in things like frozen seafood (and is one of the few places outside Thai-inhabited neighbourhoods where you can get spicy luncheon meat).

And then we have Bestmart 360, which started up just a couple of years back. It’s the same sort of approach: look around the 99.99% of the world’s packaged food products that the Park N Shop-Wellcome duopoly don’t carry – and ship in whatever looks like good value. As with the other interlopers, it’s not so much the low prices of the parallel imports as the novelty of the obscure Asian, European and other brand names. 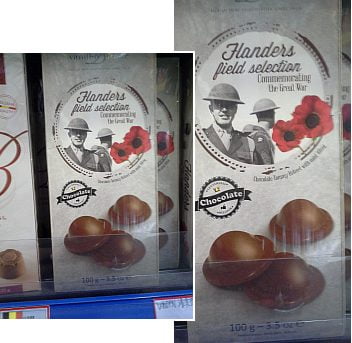 Even among the weird and offbeat products at Bestmart 360, this jumped out off the shelves at me. ‘Flanders Field Selection’ chocolates – Belgian – supposedly created in honour of the valiant heroes of World War I (ongoing centenary, etc), in the shape of what the packaging calls a ‘Tommy helmet’, the ‘tin pan hat’ of the British and American soldiers in the sodden, rat-infested trenches of the Western Front.

Needless to say, after recovering from a latter-day consumer-society variant of shell shock, I grab a box of these things. Eight for HK$20, since you ask. The chocolate is OK, quite thick, and has a slightly minty white filling. They are awkward to hold and bite, but that is no doubt the hardship we must bear to pay homage in this way to the fallen. If I didn’t see it and eat these things, I would imagine it was a parody, but it is indeed a real concept, raising funds for New Zealand veterans.

Mere governments or politicians desperate to put a spin on something would never have the creativity or imagination. Or the nerve. “All done in the best possible taste,” naturally.