Yet another think-tank launched

Even Marie Kondo, Japan’s decluttering-as-Zen guru, would give up trying to sort out Hong Kong’s sprawling profusion of think-tanks, which seem to duplicate faster than

socks in a drawer. One thing is for sure: none of them ‘sparks joy’, as she puts it.

Although theoretically dedicated to policy studies, think-tanks tend to be single-issue PR outfits pushing a predetermined idea or dogma, or they are simply vehicles for self-publicity by politically ambitious bores who feel a need to get in our faces. The One Country Two Systems Research Institute, for example, is bankrolled by tycoons as a way of shoe-shining the Communist regime in Beijing. Lawmaker Regina Ip’s Savantas Policy Institute aims to convince or at least strongly suggest to us that Hong Kong would thrive under her visionary leadership.

This week’s new think-tank is called Path to Democracy and is brought to us by the Civic Party’s famously moderate Ronny Tong. Its goal is to explore a ‘third way’ to universal suffrage between the two polarized extremes represented by Beijing and the pro-democrats. This is audacious in that China’s one-party state does not do ‘second ways’, let alone third ones: there is only one way, and that is whatever the Communist Party says it is. But by overtly distancing itself from the pro-dems’ existing stance, the new group may qualify for some sort of pat on the head as a reward for apparently splitting the evil opposition camp.

Like no-one since the Democratic Party’s founder Martin Lee, Ronny is heavily into carrying a Gloomy Air of Martyrdom, and would probably relish being savaged to death simultaneously by other pro-dems seeing him as a traitor and by the pro-Beijing side as revenge for his past role in (among other things) thwarting the Article 23 national security legislation back in 2003. Failing that, he could probably live with discovering the holy grail of Hong Kong politics – a pro-democracy group that Beijing accepts as non-hostile.

It is probably an unachievable dream, because the Communist system knows only two ways of relating to the rest of the world: either you kowtow and obey and get your pat on the head, or you are the enemy and must be crushed. There isn’t a middle way where you and the dictatorship sit down like adults and everyone basks in mutual respect.

However, the Leninist system allows for United Front co-option of the unlikeliest people – like Hong Kong’s property tycoons or former running dogs of the British colonial rulers. One possible hope for a ‘third way’ would be to successfully attract public support away from the traditional pro-dems. If Path to Democracy can act ‘sincere’ and offer Beijing a route to pacifying and better controlling Hong Kong, who knows what might be possible?

This may be what Path to Democracy is gambling on. Among its advisors and members are former senior civil servant Joseph Wong and economics professor Richard Wong. While as individuals they may not be interested, they represent a type of person who could conceivably win Beijing’s approval as a leader of Hong Kong who does not come laden with tycoon or Communist baggage and indeed who actually has a brain. In theory. It’s a long shot.

Another think-tank is jumping up and down and yelping for attention. Former Chief Executive Tung Chee-hwa’s Our Hong Kong Foundation (which also counts Richard Wong as a member) has been pushing the proposed political reform package recently. He is now criticizing the pro-democrats for ‘bundling’ their beliefs – by which he means uniting in agreement to vote the package down. He calls on them instead to vote according to their conscience.

Like all Chief Executives, Tung came into office via a rigged election – namely via the block vote controlled by the Communist Party in Hong Kong’s Election Committee. This is the same body that would nominate candidates under the political reform proposals. The fact that its members would select the ballot pre-determined by Beijing, rather than vote according to individual conscience, is the very reason the pro-dems look set to reject the package. Tung’s comments would take some real nerve, if he actually considered what he was saying. 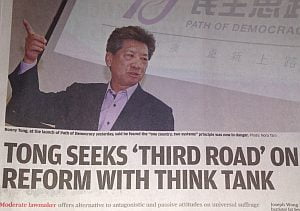 10 Responses to Yet another think-tank launched