April 1, and the joke stories in the South China Morning Post are rather good.

Putting the jolly Fools’ Day japes to one side, we also learn that the Hong Kong government is out to measure ‘youth competitiveness’. Delving deeper, we find that the decision to gauge it was made before researchers actually knew, or asked, what it is…

…most of “them” needing “to be” put “in” inverted “commas” in that slightly “disturbing” way “Chinese” state-owned “newspapers” do when “mentioning” things “they” don’t “like”.

It is tempting to mock this mélange of sociology-babble, do-gooder hand-wringing about

‘youth’ and bureaucratic fretting about Hong Kong’s place in the world. It is all too easy for us to sit on our laurels. How can Hong Kong – birthplace of such impressive youngsters as Time/Forbes/Fortune hero Joshua Wong – seriously doubt the competitiveness of its kids? Watching the students run rings round their stuffy and witless elders on that TV debate last year, who could doubt the superiority of the next generation?

Then, from our deadly rival Singapore, a new adolescent star bursts onto the scene: Amos Yee, whose magnificent good-riddance video rant at Lee Kuan Yew even incorporated a brief stomping for Christianity. Can Hong Kong match that? At the very least, we should consider setting up a Teenage Precocious Satirical-Slander Talent Quality Migrant Visa Scheme to get Amos up here and issued with an ID card.

Our ‘youth competitiveness’ campaign has its work cut out. It’s not every day a 17-year-old can justifiably smirk, but this one’s earned it… 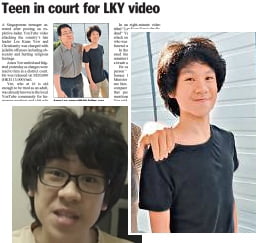