I passed through Tuen Mun yesterday as the protest against parallel traders/cross-border smugglers was starting. Although small, the assembly blocked a road and walkways for a while. And it was emotional. Barely an hour or two after I had hacked my way through their crowds of suitcase-dragging Mainlanders, shopping malls Trend and TMT were scenes of scuffles and pepper-spraying. Firemen were out in force in case anti-locust arson broke out.

The demonstration was organized by a couple of minor nativist-type groups on the fringes of Hong Kong’s broad pro-democracy spectrum. Their targets were Mainland shoppers and the stores selling vast quantities of milk powder and other items. Picking on the shoppers is unsavoury; whether they are individuals buying family groceries or part of organized smuggling rings, they are mostly just plain folks doing what they can to get by. But it’s also understandable: they are literally crowding local residents out of their own

neighbourhood. (Basically: when it gets to the stage that I am so frazzled that I kick suitcases out of the way, rudeness has become excusable.)

The South China Morning Post headline calls Tuen Mun a ‘town selling its soul’. This suggests the residents are complicit, when in fact most are victims of economic distortion beyond their control. The arbitrage phenomenon arises from Hong Kong products’ superior price/quality compared with goods available just across the virtually open border. It is compounded by Hong Kong officialdom’s ethos that property owners’ rights naturally override any public interest – no retailing-based nuisance is so great to require regulation. To make it impossibly sensitive, the influx is of Mainlanders, with whom we are supposed to be happily integrating in one harmonious motherland blah blah. (If they were Gambians, it would just be ‘screw you’, problem solved.) Tying officials’ hands even more, the protesters are part of the Umbrella movement, which Beijing classes as subversive and foreign-influenced – so merely acknowledging their complaint is potentially unpatriotic.

So the activists have found a particular weakness in the government’s defences here. Officials point out that 25,000 parallel traders have been identified and barred from Hong Kong, but it is clearly a drop in the bucket. They say there are no signs of the problem getting worse, when the situation is already intolerable.

Tuen Mun is a classic example of Hong Kong’s psychopath urban planners’ approach of laying out elaborate road networks first, then wedging retailing, housing, and finally space for pedestrians, into whatever bits are left over. This misallocation of space has exacerbated the street-level impact of the influx of outsiders. But it works both ways: as they found out yesterday, it takes only a small number of activists to bottle up herds of Mainland shoppers – tailing back hundreds of yards – trying to get to a particular bus stop. Talk about easy. They will no doubt be back. 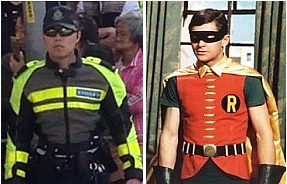 27 Responses to A government weak spot