Hong Kong’s former Security Secretary Regina Ip falls victim to an email hacking attack that resulted in US$65,000 being transferred from her Swiss bank account.

Some interesting things to note… It wouldn’t have happened if fellow establishment bigwig MTR Chairman Raymond Chien hadn’t previously been hacked, or if she had treated an

email attachment purportedly from him with suspicion. Lessons for us all. Also, it wouldn’t have happened if she were using a local Hong Kong bank account, as the regulators require a far more secure online funds-transfer rigmarole involving magic personal password-generating black boxes, which many of us find irritating but must admit seems effective. Then there’s the Swiss bank account thing. Can you get any more 1970s? I thought in these days of international cooperation against money laundering and tax-dodging, Alpine banking secrecy belongs to movies.

Touchingly, Regina assures her adoring public that there is no way the hackers could have accessed sensitive and secret Executive Council documents. It is true that all proceedings of Hong Kong’s top policymaking body are confidential. But it is also obvious, if you monitor these things, that ExCo papers contain the same mendacious, self-serving gibberish on constitutional reform, land supply, etc, etc as the government’s freely available press releases, and that ExCo non-executive members are, if anything, more prone than the general public to swallow the half-truths.

The other big story: mega-tycoon Li Ka-shing is thinking of selling off part of his global sea port holdings. For the South China Morning Post it qualifies as both a general news and a business story. There was a time when the angle for general readers would focus on the myth that Li’s empire of cartelized or natural-monopoly interests contributed to, rather than skimmed off from, Hong Kong’s wealth – and we would be invited to quake with fear that the great man might pull out of Hong Kong and leave us to our fate. But under Xi Jinping, China’s leadership seems less infatuated with grasping rent-seeking plutocrats (or at least with our grasping rent-seeking plutocrats). The press follow Beijing’s cue (even if the media owners are themselves grasping rent-seeking plutocrats – yet again, we see that he who lives by the shoe-shine, dies by the shoe-shine).

Li got into worldwide ports around the time the Great 1990s Globalization Frenzy took off and international trade increased massively. That phase of world economic history is now over, and for future growth you move on. Li is after assets in Europe. The continent where debt and a lunatic shared currency are plunging nations into penury while, in the popular imagination, aging and Islamic time-bombs are ticking loudly. Where others see doom, Li sees an essentially stable, democratic, free, innovative and prosperous – and big – market going cheap. Think in decades.

A few extra ingredients spice the story up. There was a time when a Hong Kong property tycoon would count on a pliant bureaucracy to rezone his old utilities/transport infrastructure land for residential/commercial use, and make billions in profit. With the Pearl River Delta re-export thing now a sunset industry, his container port space in western Kowloon is ripe for such a transformation. Li apparently calculates that the rules of this game (which gave us Whampoa Gardens, Taikoo Shing, Times Square etc) are changing. But maybe not for big Chinese state-owned conglomerates, already co-owners.

To spice things up even more, some of the Hutchison Ports terminals are in far-flung, exotic parts of the world of the sort that Beijing’s strategists fantasize about as ‘string of pearls’ naval bases. As its (over-) eagerness to develop port facilities in Sri Lanka suggested, China may like the idea of civilian shipping hubs doubling up as military outposts to serve the dozens of PLA aircraft carriers and submarines that will be valiantly ruling the waves in years to come. Host nations might have different ideas, of course, but if you’re looking to portray value in Li’s port holdings, it’s worth a try.

As he should: the asking price is considered pretty steep. Whatever happened to ‘friendship prices’?

Looking ahead to a possible election bid by the old girl, I declare the weekend open with top-secret evidence (no email hacks involved) of Regina Ip back in her glorious ‘Broomhead’ days accepting mysterious gifts from senior US military contacts… 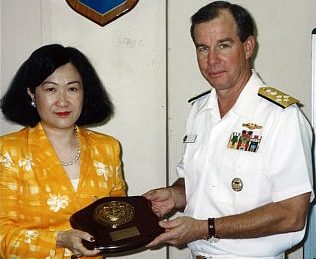 17 Responses to Swiss bank accounts and strings of pearls