The word is out: if you are one of Hong Kong’s great and good and you want some sweeties or a pat on the head from Beijing, you better start talking crap. Not that our establishment worthies need much encouragement. Involuntary pre-emptive shoe-shining is part of their DNA. They have just had a nasty shock after seeing Liberal Party leader James Tien dragged into a corner, given a severe smack on the bottom and sent to bed with no supper. And, hey – they’re just good at it anyway.

The financial bureaucrats are leading the way. Monetary Authority boss Norman Chan says the city’s pro-democracy protests will shake the foundation of the local financial market (yes, the one he oversees) and damage the rule of law. His predecessor Joseph Yam also spouts the ‘rule of law’ warning, predicts a loss of employment opportunities and fears a reduction in Beijing’s ‘preferential policies’ towards Hong Kong. For the record: those ‘foundations’ are 100% intact; the main threat to rule of law seems to come from overzealous law enforcers arresting people for wearing Captain America costumes; we have, if anything, a labour shortage; and the idea that Beijing has ‘preferential’ policies for Hong Kong is a myth.

It takes real skill to compress so much crap into so few words. Of course, it helps to present the doom as forecasts. Chances are that, by the time it becomes clear that the horrors didn’t happen, we’ll have forgotten that Norman and Joseph mentioned them. Won’t we?

Executive Council member and markets regulator Laura Cha takes a different approach: history crap. Unlike the hackneyed warnings about the economy and law, this is exotic and attention-grabbing. Indeed, it can be quite memorable. And that’s the problem. As ex-Security Secretary Regina Ip found with her comments 12 years ago about democracy and Hitler, this sort of crap gets you into hot water. 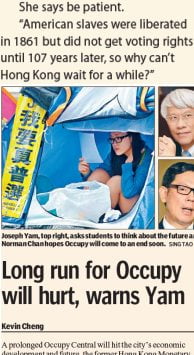 Laura says: “American slaves were liberated in 1861 but did not get voting rights until 107 years later, so why can’t Hong Kong wait for a while?”

Let’s not quibble over 1861 (Lincoln’s emancipation proclamation was a couple of years later, and the 13th Amendment was ratified in 1865). And let’s ignore ‘107 years later’, 1968 (the Civil Rights Act was in 1964). Her main assertion is simply wrong. Freed (male) slaves were given equal voting rights after the Civil War (the 15th Amendment, 1870). A white, especially southern, backlash – poll taxes, the KKK, lynchings, Jim Crow laws – gradually deprived them of those rights in the following decades.

More to the point, the whole analogy is absurd: is she likening Hongkongers to recently freed slaves? And what’s this stuff about ‘wait for a while’? If you have atrociously bad governance threatening livelihoods and possibly social order, you don’t ‘wait for a while’ to fix it.

Not everyone is joining in the Let’s Talk Crap for the Motherland campaign. A few of our biggest plutocrats have made vague let’s-all-be-happy-and-harmonious pronouncements, but most have been reluctant to say anything. Beijing probably understands. Everyone hates the property tycoons, so it would only make things worse if they stood up and said they support CY Leung and think he’s brilliant – not least because everyone would know they are lying.

Then there’s the curious case of Tsang Yok-sing, a leading figure in the Communist Party’s local front, the DAB, and president of the Legislative Council. By disputing whether evil foreign forces are manipulating the Occupy Central protests and fomenting revolution, he is directly contradicting one of Beijing’s key Bits of Crap You Must Say You Believe (of course it’s all run and paid for by the CIA – look at all those supplies of bottled water the protestors have in their camps). He is a born member of the Communist ideological faith, not some instant-noodle patriot tycoon shoe-shining whoever’s in charge. He has no business empire in the Mainland for Beijing to hold hostage. He is in some ways in a privileged position. But at the same time, he more than anyone should be echoing the official line perfectly.

We can only assume that he has permission to talk sense to provide a badly needed flash of credibility amid the constant idiotic diatribe, to reassure us that the powers that be have not lost their minds, and there is some sort of sanity at the end of the tunnel. A reminder that the talking of crap is to prove loyalty to Beijing, not to change minds in Hong Kong.