As Hong Kong’s Occupy Central/Umbrella movement staggers on against all the odds for a third week, and the city’s police manage to disgrace themselves, Chief Executive CY Leung cancels plans to take questions in the Legislative Council today on the grounds that it is not an appropriate time. More-than-obvious question: if not this, what time would be appropriate?

On top of countless blunders and miscalculations by the authorities, we now have the blurry-video, or ‘alleged’, beating by cops of the Civic Party’s Ken Tsang. A colleague of the suspected police could be speaking of the administration – or the whole city – when he says “…They are in deep s*** but there’s nothing we can do about it.” The last few weeks have brought us the surprising, the bizarre and the surreal, but it gets stranger still when you see international media describe how the “incessant, unintelligible screech of a female officer’s voice filled the air” in a report from sleepy old Hong Kong. And then the US State Department expresses ‘deep concern’ and calls for a full investigation. (This isn’t the US where cops killed some 110 people in August alone – it’s a different one.) 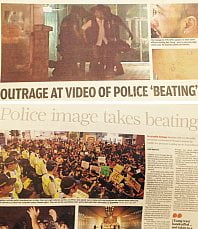 A statesman-like leader could use the Ken Tsang kicking as an opportunity. The incident is almost universally (if not perhaps 100% accurately) seen as something unimaginable and freakish here. It could warrant a call to everyone to step back and calm down. To have any credibility, such a call would have to include an acceptance of responsibility: what has happened is ultimately a failure of government, and the police, protestors and public should not be blaming each other. Those of us in charge of policymaking must mend our ways radically, and here’s how we start…

The idea that CY would stand before the legislature and say something like this is 10 times more mind-warping than the most surreal and bizarre things that have happened so far. The Hong Kong government is chosen and installed by the Chinese Communist Party, which can do no wrong; any ‘deep shit’ is by definition caused by hostile, probably foreign, forces. CY and his fellow officials, when they recite their fatuous or plain false one-liners, can’t bring themselves to mention the students or other detractors as people or citizens who might have a point – just as an enemy to be vanquished, or at least (improbable as it may seem) outwitted.

So Ken Tsang’s beating joins the whole litany of screw-ups that burden the government. Officials think they have to appear unmoved and aloof; that way they differentiate themselves from all the rabble out there, heckling. One perfectly valid criticism of our pro-democracy politicians over the years is that they automatically oppose whatever stance the government takes, on principle, to the point where they would insist the world is flat if CY said it’s round. Now the government itself is doing it. Critics say it’s wrong for cops to beat a handcuffed prisoner, so officials essentially refuse to acknowledge that something serious and damaging to the community might have happened. That’s supposed to impress us. You can see why this could drag on for ages.

29 Responses to Ken Tsang beating leaves government clueless as ever