The Hong Kong authorities achieved something amazing over the weekend. They started off facing a smallish, peaceful week-long sit-in/teach-in at Tamar by students boycotting classes. That gathering was augmented by distinctly non-ferocious high-schoolers on Friday and a slow stream of sympathizers during Saturday.

That could have been the end of the story, with scholars heading back to class as we speak. But no.

(The following might not be in exact order, but roughly recounts the ‘gradual and not so orderly’ progress from just-another-protest to worst-mayhem-since-1967/’Umbrella Revolution’ in less than 48 hours.)

As weekend approached, bureaucrats and police decided to impose pointless and irritating conditions on the student sit-in. They started by denying permission to use the Tamar park area, giving a permit instead to a crudely contrived and barely attended patriotic event featuring dancing grannies in pink. Then the cops, having wedged protestors into the avenue next to the government/legislative complex, started restricting access. Convenient pedestrian routes from the nearby MTR station were closed except to people leaving, and with the road blocked at either end by metal barriers, people arriving had to line up to get through a narrow space. This gratuitous inconvenience (like all that followed) was streamed live to the rest of the city, and the numbers of people deciding to join in rose significantly as Saturday progressed.

The breaching of the wall and the taking of Civic Square was a provocation the police could have shrugged off. Similarly, they could have ignored rather than disrupted the shipments to protestors of bananas, water and goggles. But they didn’t, and the mood got more defiant.

With the demonstrators bedding down on the street for the night, Benny Tai announced that this was now the official Occupy Central – previously slated for Wednesday in, well, Central. Student activists resented this hijacking of ‘their’ protest.  If there was any opportunity for the government to exploit this division over branding, they didn’t take it.

Instead, after isolating and penning in the original protest, the cops found themselves surrounded by a newer and bigger one of reinforcement demonstrators. So they spent Sunday establishing an even bigger cordon around them – blocking roads, obstructing overhead walkways and sealing off MTR exits.

Within hours as evening fell, yet even more thousands of pissed-off people were turning up. Incapable of detecting a pattern here, the cops then started firing tear gas and strutting around in gas masks and helmets with CS guns and shotguns. The Remingtons were presumably loaded with non-lethal munitions, but rumours started spreading about threats to use live ammo, and about plans to cut off the Internet over whole districts, and about the PLA sending tanks in.

Then it’s as if the whole city erupts. As Sunday night fell and progressed, crowds turned out and blocked off streets not only in Admiralty but in Causeway Bay and Mongkok. Not just any old streets, but the main ones, like Nathan Road.

Monday morning, this being Hong Kong, everyone goes to work. But several key intersections on both sides of the harbour remained occupied by determined – and exhilarated, defiant and radicalized – protestors who have just given the city’s government the biggest slap in the face anyone could recall. As on the day after the 2003 July 1 march (when then-CE Tung Chee-hwa retreated into a bunker for a week), there’s a good feeling. Not least because of the huge drop in traffic in many downtown areas; could get used to this.

So to recap: a police force with a long record of calmness and efficiency sets out to handle a gentle, law-abiding and basically normal student protest in a highly civilized city, and ends up losing control as citizens rise up and occupy districts in scenes that look like Tahrir Square. The reason, obviously, was the use of violence, which appalled and then attracted huge numbers of additional protestors. Why did the authorities depart so drastically from their usual tried-and-tested minimum-force tactics? Unless the senior operations cops have become stupid overnight, it can only be because of political pressure. And that can only come, ultimately, from Beijing. After a whole string of heavy handed, clumsy, cretinous miscalculations (white paper, cyber-attacks, fake referendum, etc, etc), it comes to this.

To Beijing, this is not about Hong Kong, but about the danger of the infection of rebellion spreading from that irritating pimple to the Mainland. The Chinese leadership will not give way on political reform, and after the experience with Tung will instinctively want to stick with CY on principle. The rational – and not especially challenging – option would be to ask why people in Hong Kong are angry, and fix it. But of course that goes for Xinjiang and much else. Clearly, China is being run by mouth-frothing paranoiacs smashing anything that moves with a sledgehammer. They, not the Occupy Central organizers or the Hong Kong Police, are the ones who are out of control. At this rate, they’ll nuke the Diaoyu Islands before end-year.

What happens next? Best-case semi-realistic scenario is that – after the Occupy Central actions blow over – local officials convince their Mainland overseers that Hong Kong needs to address at least a few of its social problems, and in a high-profile way. A boost in welfare spending, cheaper student loans, an emergency housing programme, or whatever it takes to convince some pretty angry people that their leadership is not totally deaf or malevolent. It might buy time, at least. Worst-case scenarios don’t even bear thinking about. 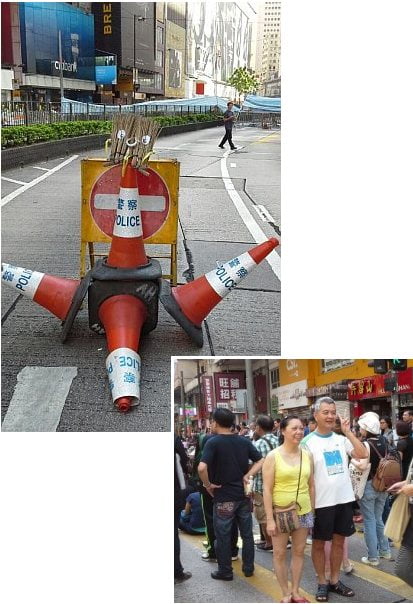