Hong Kong’s pro-democrats squirm as they face their latest dilemma. Beijing has invited all the city’s lawmakers to (for some reason) Shanghai. This is supposed to be a gesture of magnanimity, as the Central People’s Government usually bars several outspoken opposition members from crossing the border into what they are told is their own ‘motherland’. It would look churlish not to accept; on the other hand, the whole trip will be a silly PR stunt, designed to coax public opinion into agreeing to a ‘guided’ form of democracy in the 2016-17 elections.

The focus is on the system of nominating candidates for Chief Executive: if Beijing cannot rig the voting as it has in the past, it must decide who appears on the ballot. The patriotic camp is stepping up the pressure, with one hardcore Communist Party apologist in the Executive Council insisting that open nomination would be ‘unlawful, unnecessary, unimportant and unviable’ – which, if all true, would hardly need to be said. The fact is that a truly open system where anyone can end up on the ballot and be elected is incompatible with one-party rule, but no-one wants to come out and say it.

We can expect more tortuous explanations of why open nomination is not possible. Some of these, as in a letter in today’s South China Morning Post, will rely on misunderstandings or plain lies about electoral systems overseas…

This contains a blatant falsehood. Ballots in the US and other democracies offer voters a choice of candidates nominated (via primaries, caucuses, smoke-filled rooms or whatever) by different rival parties. Under the system Beijing plans for Hong Kong, all the candidates on the ballot will be picked – and others screened out – by the one same party. Only an idiot can’t see the difference. (If the US system were rigged like the National People’s Congress’s, it wouldn’t take such ridiculous amounts of time and energy; critics wanting to attack American democracy would be better off looking at gerrymandering, campaign finance and creeping voter suppression.)

Still, the letter-writer comes up with an interesting thought… 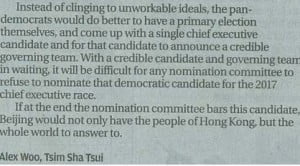 There is, in theory, nothing to prevent such a scenario. But the pro-dems seem resigned to never being electable even if the structure permits them a fighting chance (I think it was the Democratic Party’s Albert Ho who all but admitted a few weeks back that they couldn’t win but demanded to be on the ballot anyway). More fascinated by the 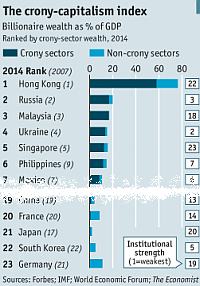 abstraction and symbolism of voting systems and the righteous fight for democracy, the pro-dems have at least partially abstained from real issues. If you want policy alternatives, you’d be better off with the radicals protesting against Mainland shoppers, or the well-mannered activists picking apart officials’ latest planning insanity.

As a reminder of the context and what is at stake, the Economist gives Hong Kong the number-one position in its Crony-Capitalism Index. And by a rather embarrassing margin too, since we make Russia, Malaysia and Ukraine look like amateurs. This is about a system where: government enables a land-housing cartel that rips you off; allows it to acquire transport, retail, utilities and other sectors, which rip you off some more; and establishes a revenue-expenditure model that rips you off yet again by recycling or sucking up more of your wealth and blowing it on contracts for cartels to build pointless infrastructure projects. In fairness to Russia, the Philippines and other also-rans, the Big Lychee’s city-state shape and size make such economic concentration a bit easier. (A plug for the old Time Out feature is in order.)

For a change: what about the pro-dems announcing that they will accept Beijing’s invitation to visit the Mainland specifically in order to raise this issue – and no other – while there?