Different perspectives for a change

The well-bred would never, it goes without saying, mock the afflicted. We would rather make an effort to accommodate the less-advantaged among us by exercising more patience or understanding. Indeed, we might even go out of our way to let them be heard, and share opinions informed by experiences and conditions unknown to most of the rest of us. And so today we have two provocative columns by people who are respectively unsighted and extremely old.

The South China Morning Post’s Peter Kammerer is blind. I’m not sure how badly his eyes are impaired, but let’s assume that he needs to rely largely on sound and touch to get around. I’ve never understood how people like this have the guts to navigate the sidewalks and transport networks of Hong Kong – and to do it alone, as many do; I’m positive I’d just stay at home. Today, this writer shows even greater fearlessness by telling us that we’re all wrong about Mainland tourists: the unbearable crush you perceive is in fact part of “the beauty of free markets and big city living.”

… the howls from the anti-mainland brigade just get louder. They cry that the tourists are making our train carriages too crowded, are making off with our favourite brand of shampoo, are deterring us from shopping at Sogo and are forcing us to wait to get into our favourite restaurant … and watch when you cross the street or try to get on a bus because of their wretched suitcases. Wah, wah, wah – it’s like hearing the tantrums of a spoiled child.

I barely notice the tourist hoards. It’s not because I can’t see – simply that I avoid going to places that I know are crowded. If I have to go there, I try to do so at off-peak times. In the most public transport-friendly city in the world, there’s more often than not an alternative way of getting around. If there’s something you want to buy and it’s unavailable – well, have you heard of internet shopping?

Maybe he is trying to be edgy and challenging. Maybe this is part of the SCMP’s weekly quota of stuff they can show the tycoon-owner as evidence of patriotism. Or maybe some despicable sub-human is writing columns under this name and keeping them from appearing in braille, so the man himself is unaware of it – though I shock myself by even conceiving of such cruelty. And let’s not forget that just because someone is blind, it does not stop them from being stupid or insane.

But maybe he is enlightening us with his unique perspective. Maybe it is the sight rather than the physical presence of the Mainland shoppers clogging up the sidewalks, letting their babies pee in bottles and filling the MTR with wheeled-suitcases that offends us. Perhaps it is simply the visual impression of our local shops disappearing, and the 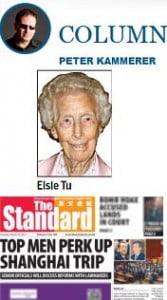 appearance – as conveyed to our optic nerves by photons – of shortages of essential goods like milk powder that pisses people off. If so, the landlords and international brands so eager to increase the numbers of ‘tourists’ can propose an elegant solution to public anger at the influx: gouge everyone’s eyes out.

Or perhaps the writer is correct in saying that you can always go somewhere else. I’m not sure where these ‘somewhere elses’ are; if he’s thinking of the tacky pagoda-thing halfway up the mountain on the trail between Disco Bay and Mui Wo, I must report that Mainland visitors have now found it. No doubt in his next column he will reveal the locations of all these plentiful and easily accessible neighbourhoods that ‘the beauty of free markets and big city living’ have passed by.

Meanwhile, over in China Daily, 101-year-old treasure Elsie Tu is left feeling a little confused by the Democratic Party’s Emily ‘Firebrand’ Lau, and her refusal to take part in the All Lucky Legislators’ Fun Day Out in Shanghai, which, as the ever-creative Standard puts it, is now ‘perked up’ with the prospect of a meeting with nice Mr Wang and Mr Li. (I say ‘confused’; I think the specialists call it ‘altered alertness’, and it can start kicking in when you keep misplacing your keys in your 30s, so don’t laugh.)

Elsie accuses Emily of ‘love for dictatorial government’ and wonders whether the outspoken pro-dem knows about ex-colonies where universal suffrage means you can be shot in the head. She continues…

Does [Lau] have some secret anti-China background and will never visit the mainland because of some historical reason? I do not know her Chinese background, so maybe she could tell us the reason for her hatred of the central government. No doubt there were many misjudgments on both sides in those early days of the revolution.

I was living on the mainland in those times, and as a foreigner (British) seemed to be treated quite fairly. Friends living in Shanghai told us of killings – although the welcome given by the people in Nanchang where I was living appeared to be cordial. It was only when the US army took over the attempted conquest of the Democratic People’s Republic of Korea that we were told to leave China where we had become officially foreigners because the American army led the war between the two Koreas under the name of the United Nations

Emily Lau, of course, is one of those Chinese people forbidden to visit (Mainland) China by the Chinese government for her ideas, not just because she clung onto her UK citizenship for what some might consider an unseemly length of time. But the great thing about our feisty senior (UK or otherwise) citizens is that they lived through such interesting times, and those fortunate enough to have kept their faculties are able to regale us younger folks with tales of a world that we forget existed. Like the one where foreign missionaries were treated well by the Chinese Communists after Mao took over, until the nasty Yankee imperialists started to bully comrade Kim Il-sung’s oh-so democratic people’s North Korea.

Tomorrow, it saddens me to say, we will presumably be back with the drearily predictable viewpoints of the 20-20-visioned and youthful.