Hong Kong is on tenterhooks, apparently, as it awaits the visit of Li Fei, the cheerless-looking number-two in China’s rubber-stamp parliament, the

National People’s Congress. He is here to ‘swap ideas’ on the Basic Law and the city’s political structure. In practice, this presumably means discreetly laying down some ground rules for the forthcoming public consultation on constitutional reform (the Standing Committee of the largely dormant NPC serves as the rubber-stamp magic wand that can change the meaning of the Basic Law in the blink of an eye).

Pro-democrats, who have mostly not been invited to hob-nob with Li, claim to be worried that the Hong Kong government is being sidelined in the reform process. They are, of course, grabbing the wrong end of the stick. The correct response would be to say: “We sincerely hope that the government is being sidelined, as that seems the most likely way to bring about some progress.”

So, fast-forward to 2017 and – the Standard would excitedly have us believe – former Financial Secretary and financier Antony Leung and personable patriot-politician Tsang Yok-sing are mounting some sort of joint campaign for Chief Executive. Leaving aside the fact that vice-presidential running-mates will almost certainly not be part of the system, we can see why some people would find such a team appealing.

Tsang would be the front-man, with the popularity and DAB/United Front machine to win an impressive share of the vote. Leung would assure the tycoons and broader business community that he would serve as Tsang’s puppet-master, with Beijing’s full blessing. The community, faced with alternative candidates like (say) CY Leung, Regina Ip or Albert Ho, would exercise its precious universal suffrage and come up with what Beijing considers the Correct Result.

Tsang denies everything, and of course it is a bit fanciful. But it’s not about the personalities so much as the formation of an apparent alliance that brings the all-important ‘business community’ and the bulk of the population together on one side.

The Standard’s proprietor and other members of the traditional tycoon-bureaucrat caste might see this as a way to maintain their privileges under a more democratic system. But Beijing might be more calculating. Inevitably, contradictions would appear within such an alliance. Should the tycoons remain entitled to rip off consumers under such a regime, or would a CE with a popular mandate have the right to level the playing field? Beijing today clings to the tycoons (and the Heung Yee Kuk and other parasites) because it can’t/won’t trust the Hong Kong people. If those people vote for a trusted Chinese Communist Party loyalist rather than for a CIA stooge, Beijing will feel less of a need for a groveling power base of grasping property developers and hangers-on.

Of course, we might all be dead by then. A South China Morning Post opinion piece ponders the possibility of a Sino-Japanese war and lists the tragedies that would 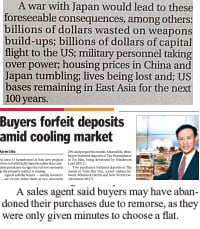 befall Asia if it happened. The order of this list is telling. First are the financial and economic costs of military expenditure and capital flight. Then comes the prospect of US troops ‘taking over power’. Third in the list of horrors is the fall in housing prices in both China and Japan. Fourth is the relatively trivial matter of humans being killed (main worry, perhaps: the impact on demand for housing). And finally, more American GIs infesting the place, handing out Lucky Strikes, nylons and candy bars to the locals, for ever and ever.

Few fear the holocaust-like devastation that is cheaper homes than the Standard, which reports that ‘investors’ have pulled out from new real-estate purchases and – brace yourself for the ultimate dreadfulness – are forfeiting their deposits. A Ritacorp agent puts a brave face on it and suggests people are walking away and leaving their HK$1 million or whatever down-payment ‘to look at other large developments’. Another puts it down to ‘remorse, as they were only given minutes to choose a flat’, which I take to mean ‘second thoughts after being subjected to a high-pressure sales assault, and then wondering what carnage lies ahead’.  That nervous feeling, indeed.