Only Monday, and Juxtaposition of the Week winner declared

crisis. By ‘manpower’ he actually means ‘labourers willing to toil for a sack of rice a week’. He seems particularly miffed that people demand HK$1,100 in exchange for mixing cement for a day – a job that, from what I have seen, looks like seriously hard work. Make it HK$1,100 per five minutes, and I might think about it. Thomas Ho doesn’t seem any more inclined to roll his own sleeves up and get stuck in either.

Flick over the page and we get a Reuters story about Swiss radicals demanding a cap on corporate pay for bosses at 12 times the earnings of a company’s humblest minion. By the standard of most places in the world – and certainly Hong Kong – the land of alps and yodeling has an extreme degree of direct democracy, with even orders for new air force fighters potentially subject to a nationwide referendum. Voters will decide whether to make the 1:12 pay ratio part of the constitution on November 24. Meanwhile, they hang 1:12 banners on their very Helvetic-looking balconies.

Fortunately for more lavishly compensated bosses of cuckoo clock conglomerates, the Swiss are a pretty conservative bunch and unlikely to approve such a measure. The report says that the CE-to-worker compensation ratio in the biggest 350 US companies is 1:231, while the equivalent in Switzerland is less than a fifth of that (say 1:45). What is it in Hong Kong? Li Ka-shing owns around 43% of Cheung Kong Holdings, which at a 2012 dividend payout of HK$7.32 billion yielded him a bit over HK$3.14 billion, or HK$262,000,000 a month. If the woman who cleans the pantry at Cheung Kong got a salary of one 231st of that, she’d be on something over HK$1,135,000 a month (though, unlike the boss’s dividends, it would be taxable).

I wonder how the equivalent pay ratios in our civil service would compare. Nothing like the Cheung Kong gap, obviously, but it would certainly exceed the 1:12 favoured by Swiss socialists, especially if you included all the allowances and perks. In fact, the real scandal in Hong Kong would be the gap between private- and public-sector pay-and-benefit levels, especially in the middle and lower scales; industry leaders like Thomas Ho never seem to have anything to say about this. But the out-of-touch, ultra-elitist nature of the top bureaucrats – combined with their policymaking incompetence – is what really grates. 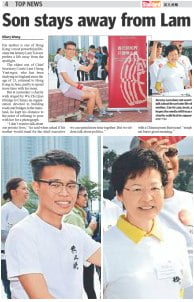 So we can’t resist taking a cheap shot at Chief Secretary Carrie Lam, whose whole family, it is no secret, resides in the UK. She took part yesterday in a fund-raising walk for Wu Zhi Qiao, a tremendously politically correct charity combining construction interests and academia and cross-border counterparts, which builds bridges in poverty-stricken bits of the Mainland (literal bridges – the structures that relieve people of the need to feel their way across rivers by feeling the stones). In particular, they get Hong Kong students to go up there and actually help construct the things, thus minimizing the financial burden on things like Beijing’s aircraft-carrier budget.

Anyway, Carrie brought her son, who has been in Britain since the age of 13, and this is naturally of great interest to our paparazzi and indeed to the Hong Kong public, curious to see their tax dollars at work. He is tragically cursed with the characteristic Carrie jawline cuts a fine, manly figure, and doesn’t really have too much of that sort of klutzy look some kids get when sent to the UK. As if to prove that all this expensive education hasn’t gone to waste, the Standard points out that the kid is alert enough to note that our air is barely breathable and to keep himself at arms’ length from his not universally popular mother. It also reports that Jeremy (it’s bound to be either that or Adrian) has been on a trip to remote parts of Gansu and Yunnan to teach local people about hygiene.

Forget pay ratios. Boys from English boarding schools are teaching Chinese villagers about hygiene. Things are worse than we thought.

9 Responses to Only Monday, and Juxtaposition of the Week winner declared