the return of the arrested activists, his government’s statement on the late-night meeting declares that the disputed islands are Chinese territory. Such matters would usually be handled by Beijing or the local branch of the Foreign Affairs Ministry (who have also commented). The Big Lychee’s usual role in foreign affairs is to keep its head down; Asia’s cosmopolitan world city officially loves its trade, investment and residents from everywhere in the world equally, including Japan. Now, Hong Kong is getting openly involved. In other words, Beijing is now using the city as a diplomatic tool.

This is part of Beijing’s shift to a visibly more assertive stance on the international stage, the prime example being recent moves to split ASEAN and militarily intimidate individual countries over China’s extravagant territorial claims in the South China Sea. The assumption among overseas observers is that a successful leadership change in Beijing later this year requires a satisfied and acquiescent public, which means absolutely no concessions to evil foreign countries. There is also a theory that the more aggressive posture is being stoked by the People’s Liberation Army’s demands for a bigger say in policymaking.

It would be comforting to think that this is temporary, and that by end-2013 the new leadership will be settled in and China will go back to being a relatively warm and cuddly regional player. But even if they could contrive a way to do that in Beijing, it would have to be mirrored in Japan and ASEAN countries, which have their own, anti-Chinese, nationalist sentiments strengthening. To complicate things, there’s also the Takeshima/Tokdo Islands tiff between Japan and Korea. And there’s the United States. The most hawkish Chinese general must know that while his nation’s forces might look good in a National Day parade, they would quite likely be a humiliating embarrassment under fire. At least we should hope he does.

China’s employment of Hong Kong as a small but perfectly formed new instrument of foreign affairs may also reflect the fact that the city now has a leader willing and able to play the role, and no doubt with relish. It would be hard to imagine Sir Donald Tsang ordering a foreign diplomat to come in for a good dressing down and spouting off about Chinese territory. Again, it would be nice to think this is temporary; the city’s de facto neutrality as a semi-autonomous region is important. 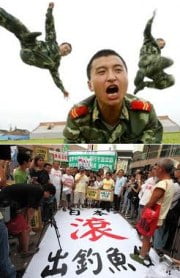 You can’t be the Switzerland of Asia if you get dragged into all of China’s barbarian-bashing, victimhood trips and more-or-less racism.

The Standard’s ‘Mary Ma’ column has fun wondering if the CE’s new role will lose the pan-democrats votes in next month’s Legislative Council election. Launching military action – or at least encouraging a rickety ship full of activists – against another country is a time-honoured way to get a boost in the opinion polls. And there is something pathetic about Democratic Party leader Albert Ho failing in his legal attempt to remove the CE from office just as CY emerges as an international statesman avenging China’s suffering during World War II. Next thing, all those people opposing National Education will drop to their knees and read out self-criticisms for their incorrect thinking.

Aside 1: Fans of Bunny Chan, the ultimate shoe-shiner of the Donald Tsang era, have been wondering what their hero has been up to recently. I can pass on the word that, in his capacity as Chairman of something called the Youth Commission, he is concerned about a spate of panic attacks sweeping Hong Kong’s middle class, for which he blames property prices. And why not?

Aside 2: This is an ad (not sure what the product is, but that’s not the point) in today’s South China Morning Post. Let’s remember that the purpose of these things is to make you want to buy something…