CY Leung becomes Hong Kong’s Chief Executive. A significantly above-average-size crowd turns out for the annual July 1 march, with CY (and the not-unrelated Beijing) being the most prominent of protestors’ many and varied targets and demands. CY, on a folksy, meet-the-people trip to Tuen Mun, is ambushed by young activists denouncing the visit as a sham. The world’s media, doing their annual post-1997 story, report an alarming gap between rich and poor, expectations of reduced press freedom and a new leadership’s integrity in tatters – inexplicably but irreparably – over the trellis in his garden. Welcome to political crisis.

The careful cultivation of his public image would strike CY as a trivial distraction, so by default throughout the two decades or so he has been in the public eye he has come across as enigmatic and sinister. Now he is at the top, anything he does – from having a roof over his car port to speaking Mandarin in the presence of China’s president – is interpreted as indicating that he poses a threat towards his home town. He has few friends, hardly any natural allies in the legislature or bureaucracy, and a high proportion of enemies among Hong Kong’s traditional movers and shakers. Former Chief Secretary Anson Chan can’t resist offering catty but vacuous advice; CY was a key advisor to our first CE Tung Chee-hwa, who basically kicked Dame Conscience out for disloyalty.

By going around groveling and humbly apologizing for such sins as trellis-ownership, CY is feeding the frenzy. Ideally he would quickly sweep this ‘crisis’ aside with some big and exciting announcements. Legalization of residential units in old industrial and commercial buildings; zoning, land premium, building and other nonsense rules to be turned upside down in order to maximize supply of cheap homes. A speedy 30% increase in health care spending funded by income from the reserves to eradicate backlogs and waiting lists, using overseas staff or services as required. Abolition of the New Territories ‘small house’ scheme with immediate effect. It would be CY and the people versus the tycoons, democrats and other vested interests.

The chances of this happening are of course next to zero. Hong Kong needs serious reform, but it must have – on President Hu’s own orders on Sunday – harmony and stability and all that.

It would be surprising if a new CE’s choice of non-official Executive Council members were to inspire hopes of decisive and radical action, and sure enough this one doesn’t. Several members are holdovers from the last Council, and the best we can say is that it could be worse. Several new members stand out.

One, Lam Woon-kwong, is also boss of the Equal Opportunities Commission (a predecessor, Anna Wu, is also on board, giving the Council an unexpected dash of human rights-type expertise). Under other circumstances, many thinking people would welcome Lam’s presence as providing our top policymaking body with the input of someone genuinely interested in subjects like ethnic minorities’ and gay rights. But so perverse is the mood that these people are instead frothing at the mouth about Lam having a conflict of interest (the theory presumably being that he will weaken the EOC’s oversight of the public sector).

Another new member of ExCo is a familiar face: academic and surgeon Arthur Li. As Education Secretary under Tung, he was by Hong Kong standards refreshingly outspoken and actually had an original policy idea in the form of kindergarten vouchers, which went on to become one of that administration’s few successes.

Of the other newcomers, one of the less well-known but more interesting is Franklin Lam. He doesn’t sound exactly fascinating, but his little think-tank, HKGolden 50, has come up with dangerously freakish thoughts (from page 89) proposing solutions to such problems as… 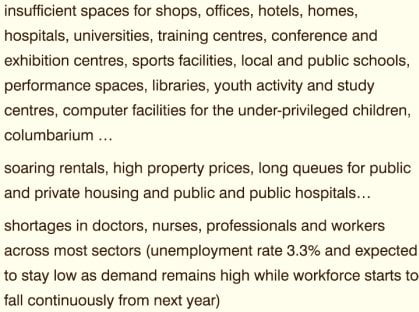 Tuesday being ExCo day, they should all be meeting as we speak. ‘Crisis’ management is no doubt on the agenda.

Click to hear ‘Tragedy and Mystery’ by China Crisis!