Back to everyone’s favourite subject

One of the many mundane-but-somehow-bizarre things about the parallel universe that is Discovery Bay is the golf cart. The car-free, whites-only, maximum-security residential compound is good for walking and cycling and has a reasonable bus system as well as taxi-vans. But some of the more overweight, overpaid and over-lazy residents, many of whom sweat profusely just standing and eating an ice-cream, can’t live without powered personal transport. They compete to rent or own one (or sometimes more) of a fixed number of silly-looking golf carts.

Way back in history, I recall people laughing when these clunky little vehicles were changing hands for HK$500,000. Since then, they have gone through the HK$1,000,000 mark and beyond. By comparison, this apparently modern, gleaming, high-tech model in the US will set you back around HK$95,000. It’s a fascinating case study in supply and demand; of course buyers are mostly counting on selling later for a profit. Everywhere else on planet Earth, you sell a used car for less than you bought it.

Someone in Disco Bay recently bought one of these golf carts for HK$2.1 million. I don’t know who the buyer was, but I do know who sold it. He is a real estate agent with several decades in his esteemed profession. He has also just sold both his apartments, including the one he lives in; he is now renting and sitting on cash. He is planning to be proud owner of another golf cart and two – if not three – apartments again by this time next year after the Great Crash of 2012-13.

From time to time I take a quick look at the most recent few days’ chatter on Asiaxpat’s billion-mile-long thread on the state of Hong Kong’s property market. Recently, a more pointedly titled ‘when will Hong Kong property drop?’ discussion started. Both contain some interesting debate, and both leave you absolutely none the wiser. (There are distinct property markets. Prices of high-end luxury places on the Peak and of remote New Territories rabbit hutches don’t track each other. For the sake of argument, however, the threads seem to be about what we might call ‘normal’ residential units for non-billionaires who don’t want a 90-minute commute. In other words, the sort of property that rises and falls in price in tandem with Disco Bay golf carts.)

Basically, we are looking at three possible scenarios… 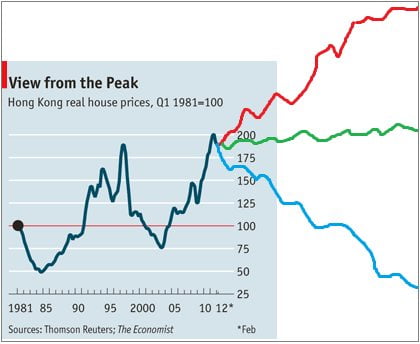 No-one has much time for the middle ‘green’ scenario above, in which Hong Kong property prices just meander along at their current levels. Maybe it’s just too boring, or perhaps it’s just sort of improbable. This subject is compelling because the world is in such a state of flux right now that everyone assumes something serious is going to happen before long, and no-one will get out unscathed.

The happy, positive-thinking, dopamine-infused ‘red’ scenario has prices going up (mostly) and forever (pretty much, at least in terms of the human lifespan). Debasement of currencies is part of the reason, as is the Big Lychee’s status as a uniquely desirable place to launder money live in – like London, Manhattan or Monaco. Local buyers haven’t over-borrowed. China won’t come crashing down, because of its vast latent domestic demand for everything. And our new leader CY Leung won’t do anything to hurt property owners because this is Hong Kong, and it’s just not done.

People have been poking fun at this upbeat argument for years. If they had bought a flat at the beginning, they would be over 60% up by now. With such an impressive track record, it is hard to believe that anyone begs to differ.

But they do, despite knowing that no-one ever made money betting against the Hong Kong property market except with a hefty helping of pure luck in timing. The wrist-slashing doomsday ‘blue’ scenario has prices dropping, and not by some limp-wristed 10%, which belongs in the green line. Obviously, they disagree with all or most of the optimists’ points. They also lie awake at night worrying about Europe.

Some would say that we in Asia don’t need to get too worked up about it. But it’s hard not to get nervous when you see leaders from the US, UK and elsewhere outside the euro zone begging Germany’s Angela Merkel to share her country’s wealth with a continent full of foreigners – something they sure as hell wouldn’t do, if they had any wealth. In some little-noticed remarks some time ago, Merkel said that Germany needed its low consumption and its high levels of exports and savings to look after its own aging population in the decades to come. She didn’t sound like this was a negotiable thing. People are now trying to convince her that Germany’s future generations of retirees and workers would suffer more from Greek/Spanish/Italian mayhem and a euro break-up than they would from just sharing out all their goodies now. As a trained physicist, she is no doubt looking at the idea objectively.

I can’t see any upside and suspect the Disco Bay real estate guy is right – but that’s what I thought 12 months ago and 24 months ago.

The weekend is hereby opened.

13 Responses to Back to everyone’s favourite subject