Weekend leaves a bad taste in the mouth

The weekend presented its usual range of fun options for those of us eager to experience all that Hong Kong has to offer: march through the streets for an incoherent blend of causes, stay at home and read on-line magazines, or go to the pub. The highly productive among us even managed to squeeze in two of these choices.

Atlantic asked why Hong Kong’s government is pushing Islamic finance, while the Islamist regime in Tunisia is not. The article answers only the second part of the question: the new government in Tunis is realistic enough not to alienate international business with Sharia banking. The writer goes easy on the hypocrisy and deception involved in supposedly Muslim-friendly finance. In order to comply with the Koran’s ban on usury, borrowers and lenders re-style themselves in such a way that a loan can be termed a service or investment and the interest some sort of fee or dividend. Apparently, God is dumb enough to be fooled by it. (Apart from a Muslim friend who gives up beer for Ramadan, my favourite bit of religious duplicity is the eruv, a special zone in which devout Jews may ‘enjoy Shabbat to the full’. Screw scripture, in short.)

So why is Hong Kong keen on Islamic finance?

The protestors yesterday were complaining about Beijing’s interference in the quasi-election and calling for CY Leung to stand down before he even starts his new job as Chief Executive. Other people are less freaked out by the Mainland’s role in the process because it’s the norm, and because on this occasion it backfired horribly and we have ended up with a CE-elect who just might give the city an overdue shake-up. One indicator will be whether he gets sidetracked with silly and frivolous projects like making the Big Lychee Asia’s dynamic, thrusting Islamic banking centre.

The old regime picked up on the Islamic finance fad a good five years after any bank worth its salt had either begun offering such services or decided not to bother. As with other lame attempts to make Hong Kong a ‘hub’ for some or other industry, it was the campaign of a government with no confidence in Hong Kong’s future and desperate for ideas – the smaller the better. Malaysia was pushing Islamic banking, so we should too. Any subsequent activity in the sector was lauded as a great achievement of our visionary bureaucrats. And all hail the HK Islamic Index. At least they didn’t blow billions by giving Muslim banks free land.

It is easy to see why Atlantic preferred the Tunisia-angle of the story. To make myself feel better, I decided on a drink. And in a bar in Happy Valley, as it happens, I found myself facing a tap for something called Somersby. I should have known better. It describes itself as ‘apple cider’, as if there is any other sort. The name is obviously dreamed up by some marketing committee – a feeble play on Somerset, the English county that produces the real thing. The barman asked if I wanted it on ice, for heaven’s sake. But I couldn’t resist seeing how awful it was.

And it is truly revolting. Genuine unrefined farmhouse cider is unavailable in Hong Kong, and is probably not in tune with poplar tastes, which would balk at the dry taste and cloudy appearance, let alone the wasps floating in it. Brands like Bulmers and Strongbow are here. I’ve always treated them with some disdain, but after the first sip of Somersby I was full of forgiveness for them. The overpoweringly sweet and sickly Somersby tastes not so much of fermented apple juice as of Ethyl-2-methylbutyrate.

When God was not writing rules banning Muslims from charging interest or barring Jews from pushing babies round in buggies on Saturdays, he was rolling out a wide and exciting range of fruit. He cleverly calculated that by making them tasty, mammals would eat them and thus spread the seeds around and enable the trees to go forth and multiply with ease (and of course enable a certain serpent to lure Eve into breaking yet another rule, with all the consequences that followed). One of the reasons apples taste the way they do is the presence of Ethyl-2-methylbutyrate.

One of the reasons. Many other compounds contribute to the flavor – indeed, flavours – of the apple. Food scientists reach for containers of Ethyl-2-methylbutyrate when they want a sort of fake, plasticky ‘apple’ flavor for, say, bubble gum. Or alco-pop. Somersby, made by Carlsberg, is an alco-pop that won’t admit it. It was originally aimed at the Scandinavian consumer and marketed with a suitably fake British image involving one Lord Somersby. The slightly surreal website swears that no artificial flavourings are in the stuff. Maybe they have bred a special apple that tastes like a chemical as part of a strategy aimed at seven-year-olds fond of a tipple with a 4.7% alcohol content. CY Leung should order the police to use the stuff as a harsher alternative to pepper spray. The anti-everything protestors would steer well clear of the Liaison Office if they thought trays of this concoction were waiting for them.

And no, barely amusing tongue-in-cheek videos do not make up for the unspeakable vileness of this beverage. 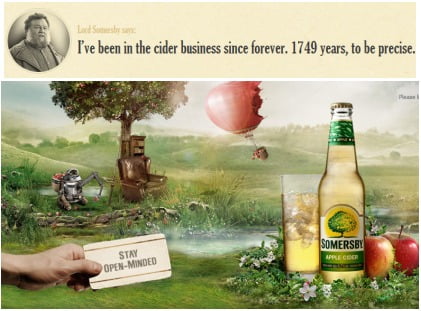 24 Responses to Weekend leaves a bad taste in the mouth